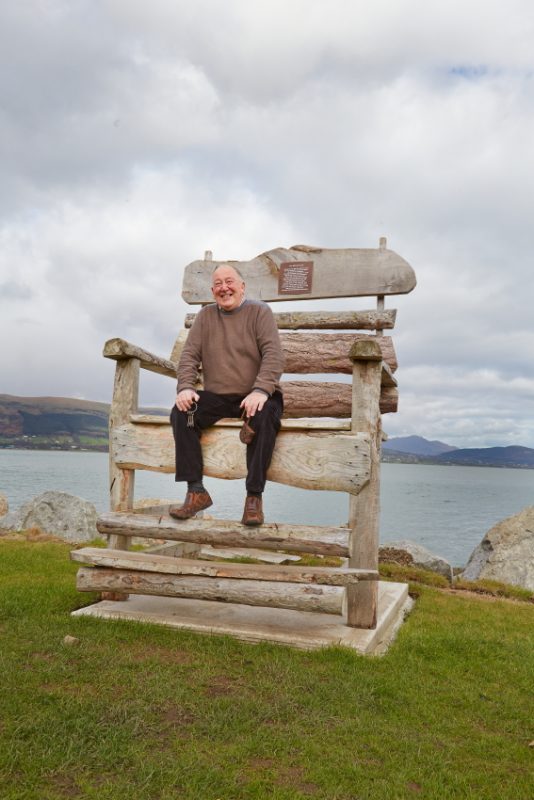 Carlingford, the last outpost of the Irish leprechaun.

Carlingford is a bustling busy town which has retained much of its medieval charm.  Home to the legends of Cuchulainn, the Tain and Brown Bull of Cooley, Carlingford is a popular destination for tourists….and then there are the leprechauns.

In 1989, local publican PJ O’Hara found a scattering of bones and a leprechaun suit with four gold coins in the pocket on the slate rock on Sliabh Foy, the finds are still displayed in a glass case in the pub. Most people laughed at him his close friend Mc Coillte didn’t believe in the leprechaun find until he himself met three leprechauns some years later.  They told him that the last 236 leprechauns in Ireland live below the slate rock on the mountain, there had been millions of them, but they died out as no one believed in them anymore. 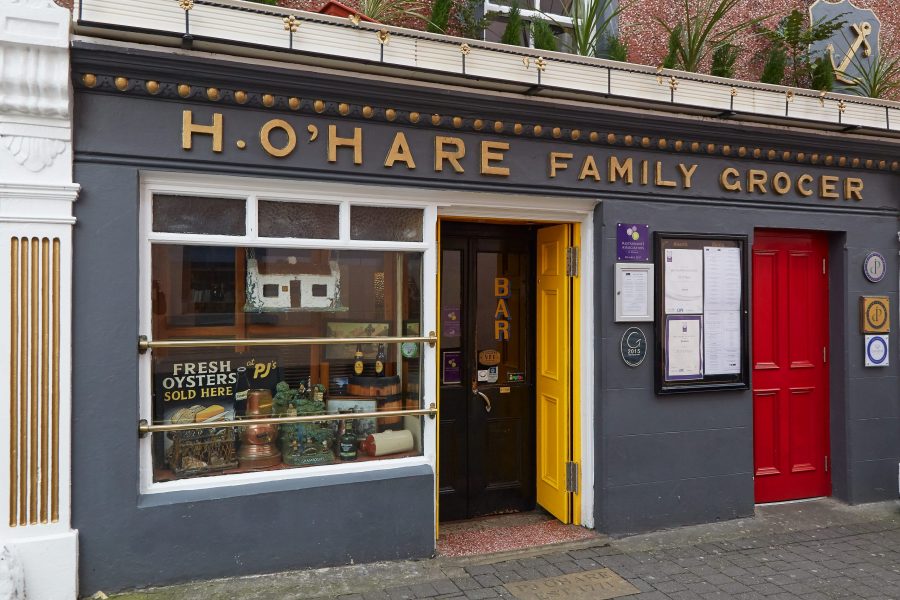 O’Hare’s where the leprechaun finds are displayed within.

McCoillte gathered a group of friends and lobbied the EU to have the remaining leprechauns protected under the European Habitats Directive, which was officially granted in 2009, under the grounds that their existence could neither be proved nor disproved.  Mc Coillte started the hunts for leprechaun gold in the same year where official licences can be bought to hunt for a pot of gold. The gold is real, a ingot valued at €1200, the hunt continues each year now on the day the clocks move forward for summer time, with profits donated to charity Cross Cause.  Visitors can also visit the fairy cavern that the leprechauns visit  each day via a tunnel from their mountain home.

The Brown Bull of Cooley 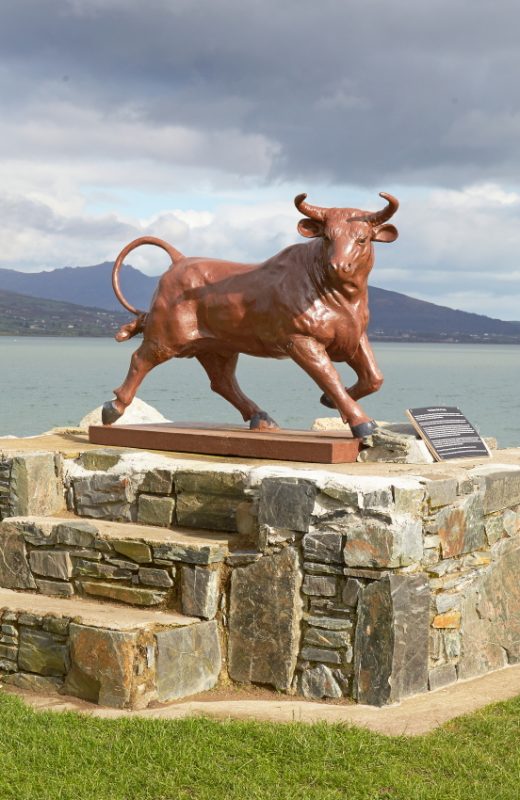 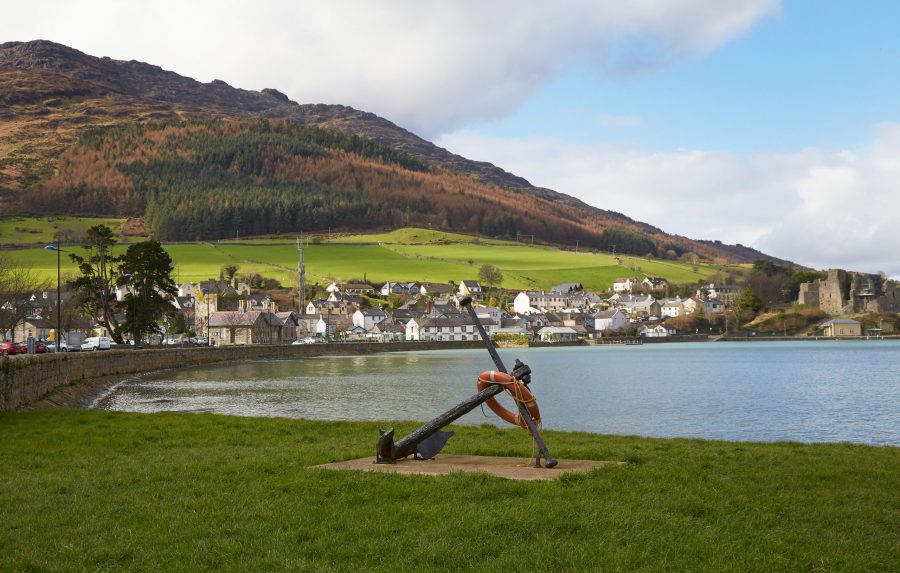 The village of Carlingford lies in the shadow of Sliabh Foy.

‘Carlingford ‘ from the Vikings.

The name Carlingford comes  from the Vikings, the Old Norse ‘Kerlingfjoror’, the ‘Fjord of the Hag’.  The first settlement sprang up around the foundation laid for a castle on a rocky outcrop between Strangford Lough and Sliabh Foy by Norman knight Hugh De Lacy in the early 12th century, the construction of the actual castle being ascribed to King John of England in 1210. 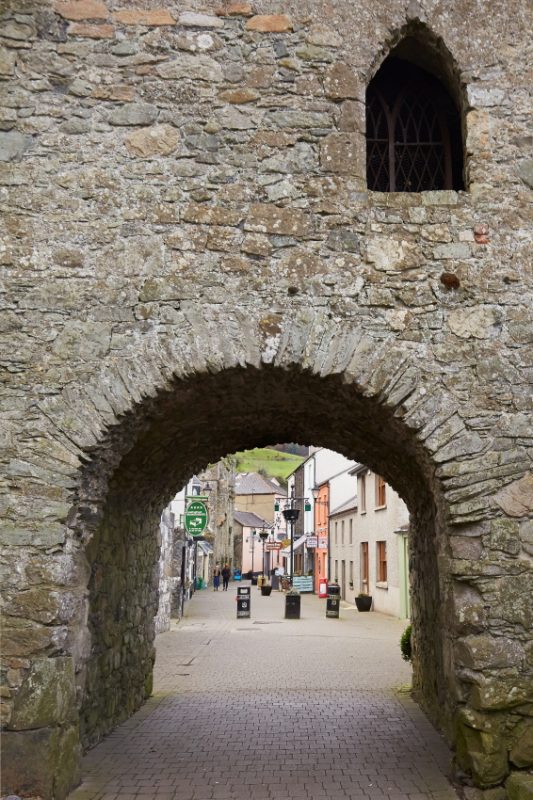 The Tholsel Gate is Carlingford’s Toll plaza from medieval times

Once established, Carlingford flourished.  The position on the east coast was excellent for a trading port, the lough had large shoals of herring and the Carlingford Green Finned Oyster was renowned around the world from the Middle Ages on.  The 14th through to 16th centuries were very prosperous in Carlingford, and the receipt of five charters between 1326 and 1619 ensured an increase in trade which led to the construction of many fine buildings still extant in Carlingford today, including the Mint on Carlingford’s main street. 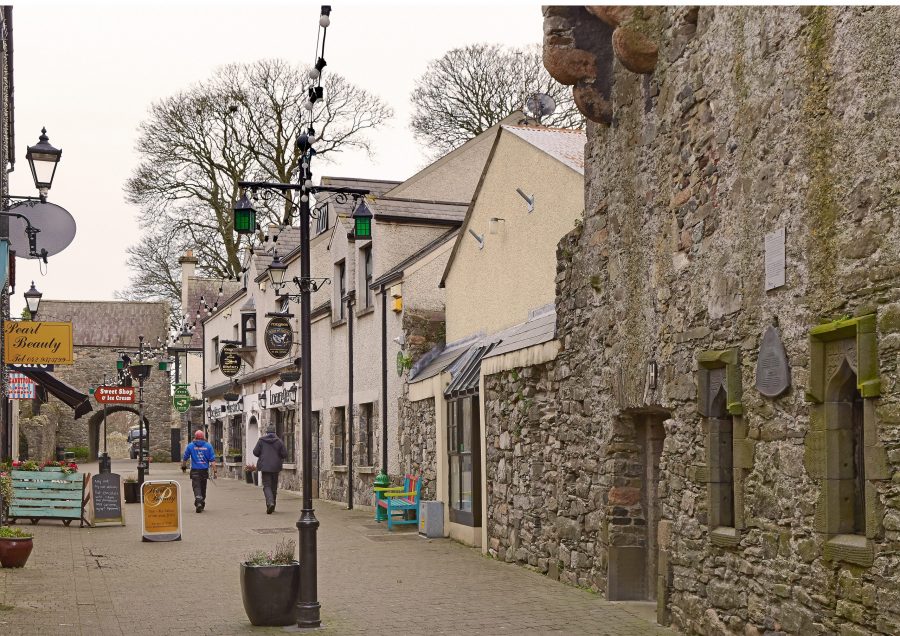 The Mint in Carlingford

And Carlingford is still known for food, specialising in local produce, fresh seafood and the famous oysters; Carlingford Oyster Festival takes place each August.  The Bay Tree Restaurant is owned by local chef Conor Woods. A self-described ‘wild child’ and ‘black sheep’, Conor found his passion in cooking.  Having graduated from cookery school in Newry, he spent three years in the Michelin-starred Deans in Belfast, where he learned ‘discipline and a lot more.’ 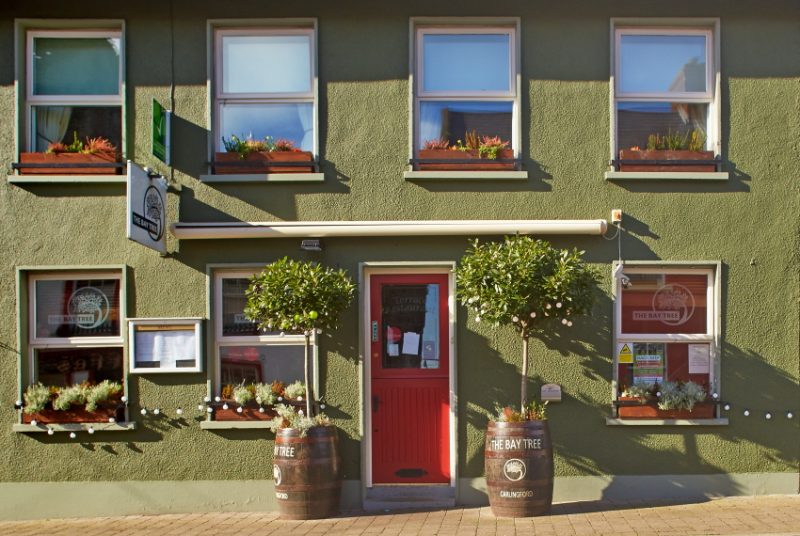 The Bay Tree in Carlingford

His ethos is to create unpretentious, quality food made with local produce, and The Bay Tree has won the Irish Restaurants Awards Best Restaurant for Louth seven years in a row, an awesome record.  Conor and wife Kristina Sakvarne, who is responsible for the constantly changing interior and table styling at the restaurant, bought the entire building in 2013 and also offer B&B. 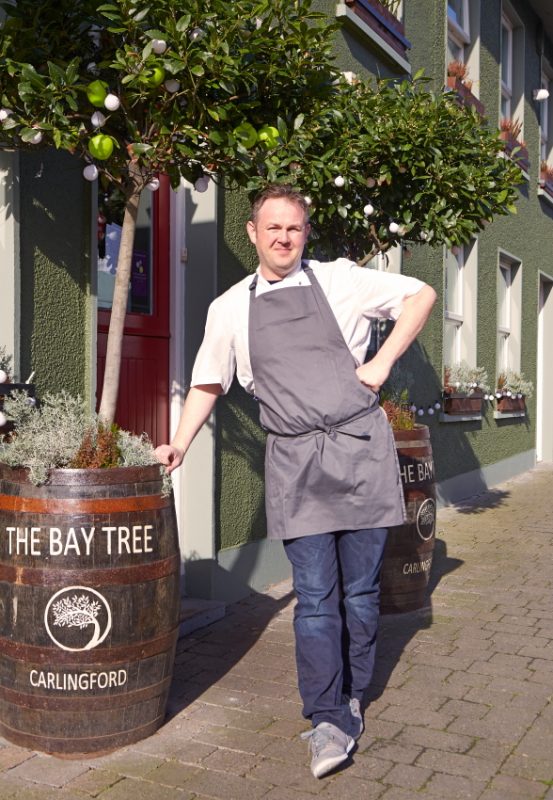 Conor Woods is chef and owner at The Bay Tree Restaurant

I tell Conor it’s time to go, I have to hurry to meet local estate agent Owens Woods. ‘No bother’, he says, I’ll get him to come and get you, he’s my uncle.’  Owen arrives and after the exchange of some cheerful insults, which seems to be a widely-accepted form of Carlingford banter, he takes me on a tour of Carlingford.   We visit Shane and Joanna Lennon’s Wild Wood Café, opened two years ago in a stunning location above the lough.  Joanna is a nutritionist and Shane is the chef, the café has a menu of healthy wholefoods with lots of vegan and vegetarian options, perfect for walkers and hikers using the Greenway and Tain trails; there are dozens of scenic walks around Carlingford. 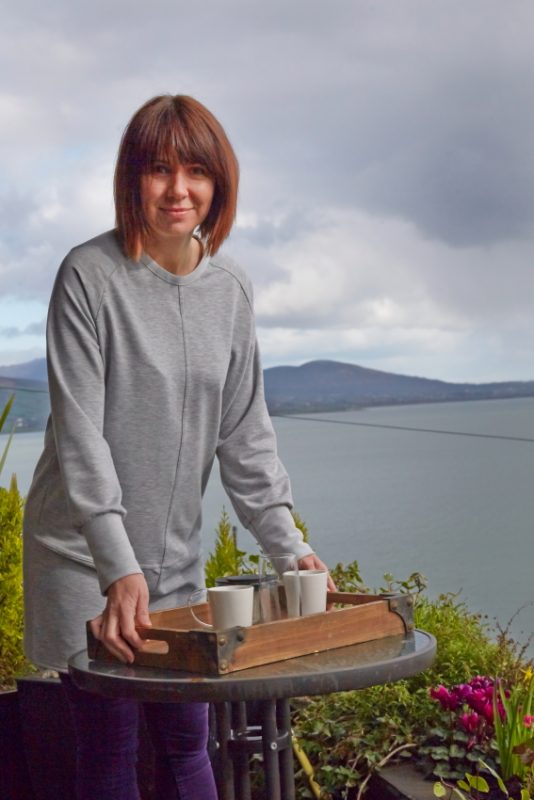 Lost in the Woods

I discover that the Wildwood Café won the Best Newcomer in Louth in the Irish Restaurants Awards last year and that Joanna is chef Conor Woods cousin.   I also subsequently discover that McCoillte, the keeper of the leprechauns, is his uncle, and  that another Carlingford eaterie, the Kingfisher Bistro is run by brother and sister team, Mark and Claire Woods . At that stage I begin to worry about how outsiders would fit in to Carlingford. 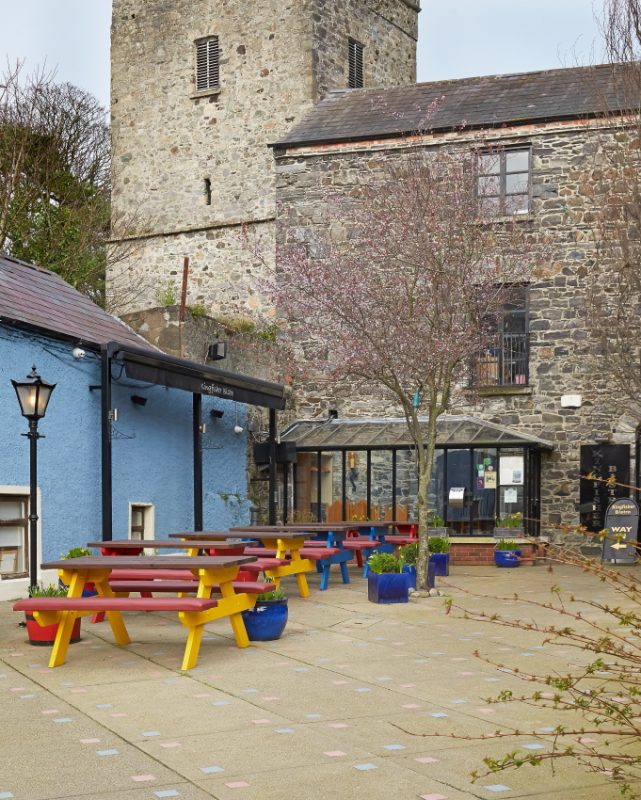 Menus from the Kingfisher Bistro

My worry is quickly scotched as we drive around the town.  Owen seems to know everybody and greets them all.  We stop to chat to Christopher Hill, a retired building contractor from Devon who likes to spend summers sailing in the Mediterranean, and is thinking of buying a house in Carlingford. Owen promises to look out for something suitable and waves at a woman crossing the road. ‘Lovely woman, from New Brunswick’, he says. ‘Very active in the local community.’ He also greets another woman, this one from Romania. ‘One of the best doctors in Carlingford,’ he reports. ‘Took her years to get her qualifications here. Good thing she did’, he adds with satisfaction.  I begin to realise that Carlingford is a lot more cosmopolitan than I thought. 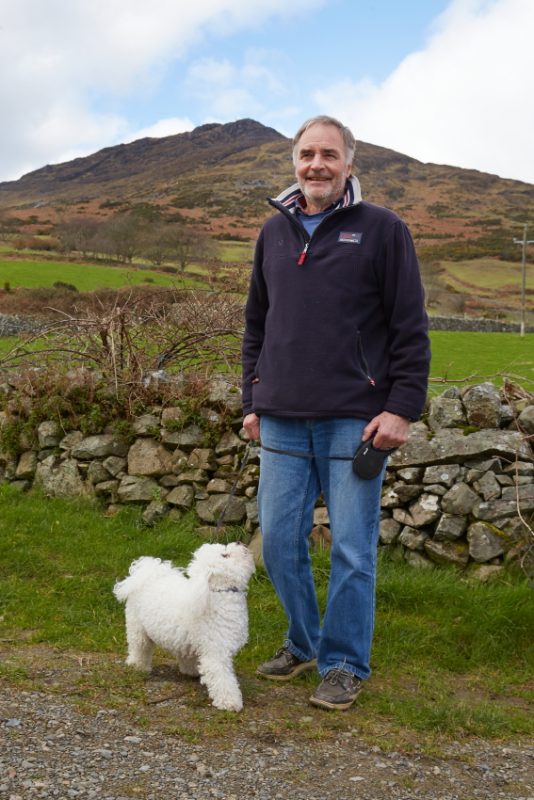 Christopher Hill from Devon out walking one of the many scenic trails  in the area.

‘Carlingford is very ‘in’ now,’ says Owen. ‘It’s popular with holiday rentals, but also we are seeing a lot of emigrants coming home and people from all over the world looking to buy.’ With equal commuting distances of just over an hour to Belfast and Dublin, Carlingford is well placed, and its uniqueness, friendliness, natural beauty and vibrant lifestyle – there’s a festival of some sort in Carlingford nearly every weekend of the year- make it an attractive place to live.  3-bed semis fetch €200-250,000 at the moment, but you can still snap up old cottages in need of repair for €100,000 plus.

Adventure on Land, sea and Sky!

My next stop is Carlingford Adventure Centre, another Carlingford success story where I meet father-and-son team Tom and Tom McArdle, who own the business. Tom senior is a former draper with a passion for windsurfing who took ‘a crazy notion’ in 1990 and set up the Adventure Centre after a windsurfing and kayaking holiday in Achill Island, where he saw an opportunity to do something similar in Carlingford. The Centre is divided into three locations Land, Sea and Sky, and covers an impressive range of adventurous activities; canoeing in the harbour, rock climbing and aerial adventures in the Centre’s purpose-built Sky Park being just a small selection. 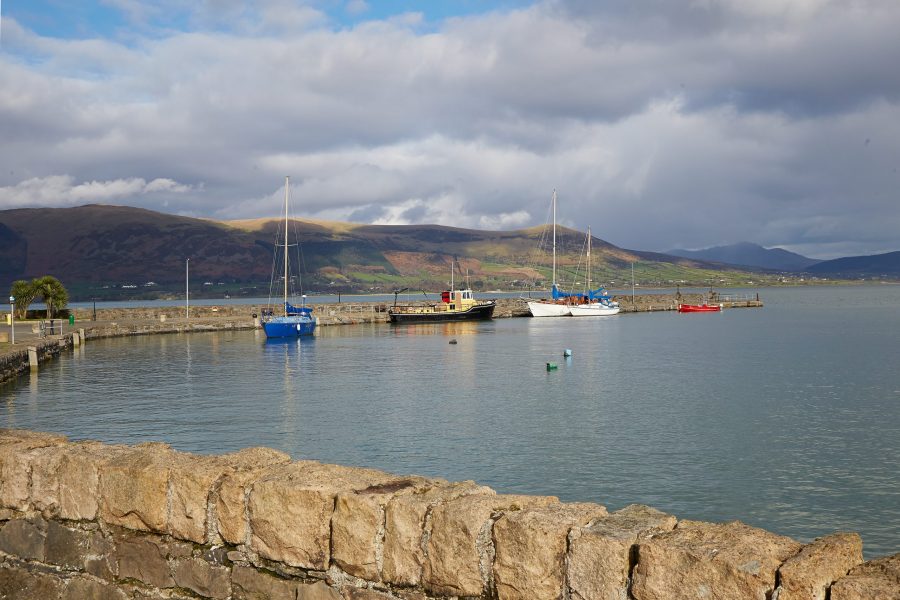 I also discover how some of the newer Carlingfordians arrived; the Adventure Centre employs a lot of people.   ‘We find it hard to get adventure instructors in Ireland, most of our instructors are from the UK,’ says Tom (any unemployed PE teachers out there who would like to retrain as adventure instructors?).  Chef Conor Woods wife Kristina came from Latvia to work in the Centre, Carlingford doctor Helena Coriliel from Romania. ‘The worst chef we ever had and the best doctor!’ jokes Tom.  I doubt the first part of this statement, taking it as typical Carlingford banter; they employed her for nine years.

My last meeting in Carlingford is with local business woman Irene Quinn.  She brings me to see the Heritage Centre in Carlingford, a deconsecrated church now a hub for theatrical and musical events; violinist Zoe Conway is a resident musician and last summer her guest artistes included Lisa Hannigan, Mundy and Bill Colgan from Riverdance.  We also visit  Mia Mullan’s designer jewellery studio and the collection of boutiques in Carlingford; there are also a thriving assortment of pubs, cafes, antiques and collectibles shops, a surprising amount of businesses for a small town.

All in all, Carlingford has plenty going on and is a great place to visit.  If you are thinking about living in Carlingford,  though, expect close to Dublin prices for property. The town is very popular.

Check out more articles on different places in Ireland in the Going Places section!