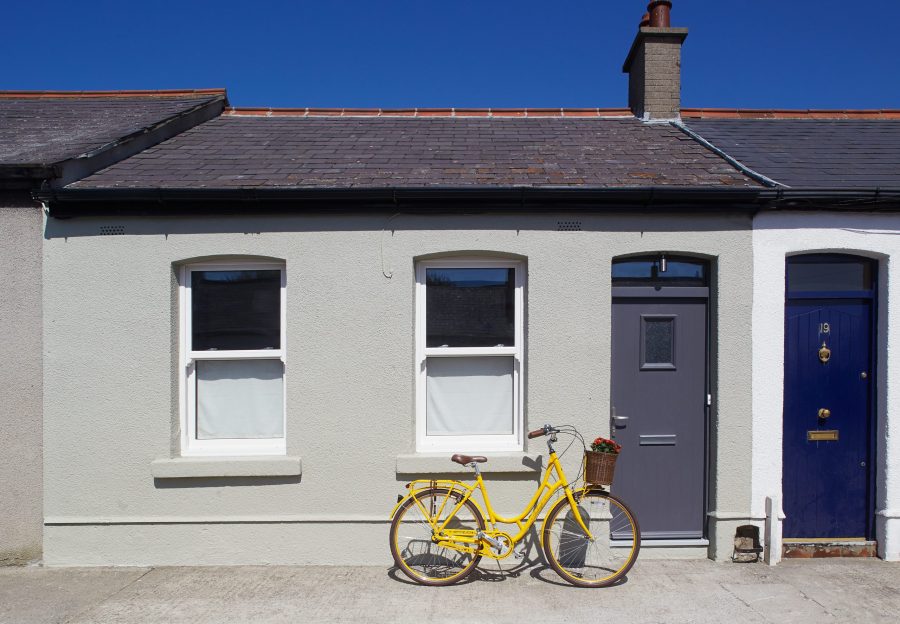 Spiralling house prices in Dublin left Julie O’Brien and boyfriend Julian Palmer despairing of ever being able to move out of their parent’s homes. Then Julie’s father, property scout and designer Wesley O’Brien spotted this tiny rundown cottage in Dublin city, and persuaded one of his investors to buy it as a renovation project…..

‘It was in pretty horrible condition, but Dad seemed sure he could make something of it, and he’s really good at renovations,’ says Julie.

‘But, yes, I  thought it was very small, and i wasn’t so sure what he was going to be able to do about that.’ You can check out some of Wesley’s work in this previous post.

The cottage had been in the same family for generations, and had hardly been altered from the original layout. The kitchen consisted of an ancient gas cooker and a Belfast sink in a tiny scullery, and there was no bathroom, only an outside toilet.

‘The house was untouched, that’s what attracted me,’ says Wesley. ‘There were no structural alterations, although there was a 1950s beige tile fireplace which would have to go. But the ceilings were 3.35 meters high, and there was a reasonably-sized back yard to use for an extension, with enough space left over for a seating area.’ 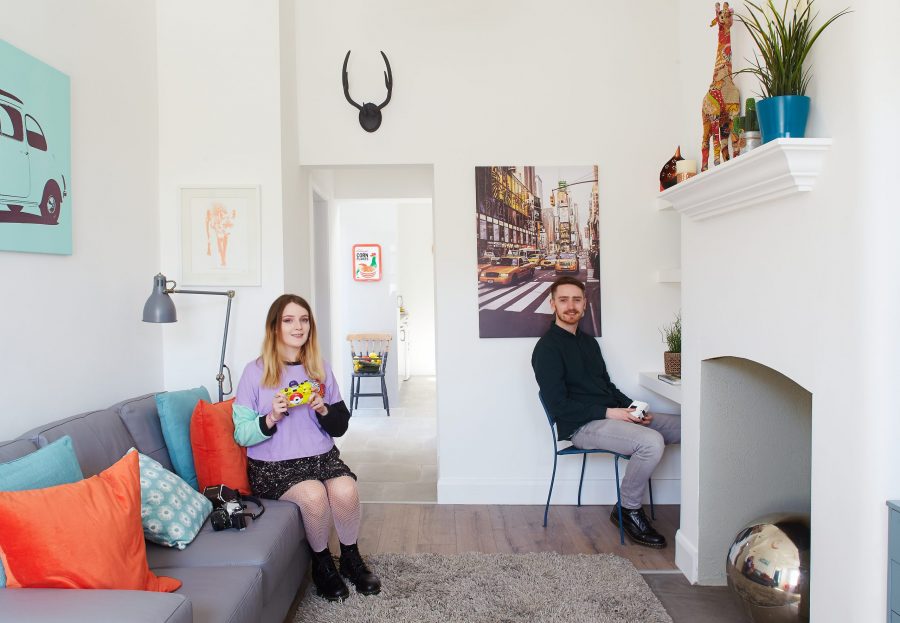 Gutting the house completely, leaving ony the front facade and two party walls,  Wesley worked on a new design. ‘It was a very small house, just two bedrooms and a sitting room’, says Wesley. ‘The main problem was that there was no place for a sofa in the sitting room; it had an internal porch one side and an unusual diagonal wall shared with the bedroom on the other.’

This was solved by taking out the internal porch and changing the diagonal wall to a ninety-degree angle, freeing the space to allow a three-seater sofa opposite the fireplace. The original plan of using radiators to heat the house was also changed to underfloor heating, freeing up more wall space. The 1950s fireplace was removed and the surround brought back to the original shape, leaving a space for a wood-burning stove to be added at a later date.  Julie and Julian wanted at least two separate workstations where they could work on projects, so overhead shelves and a wider desk shelf were added to the niche beside the fireplace. 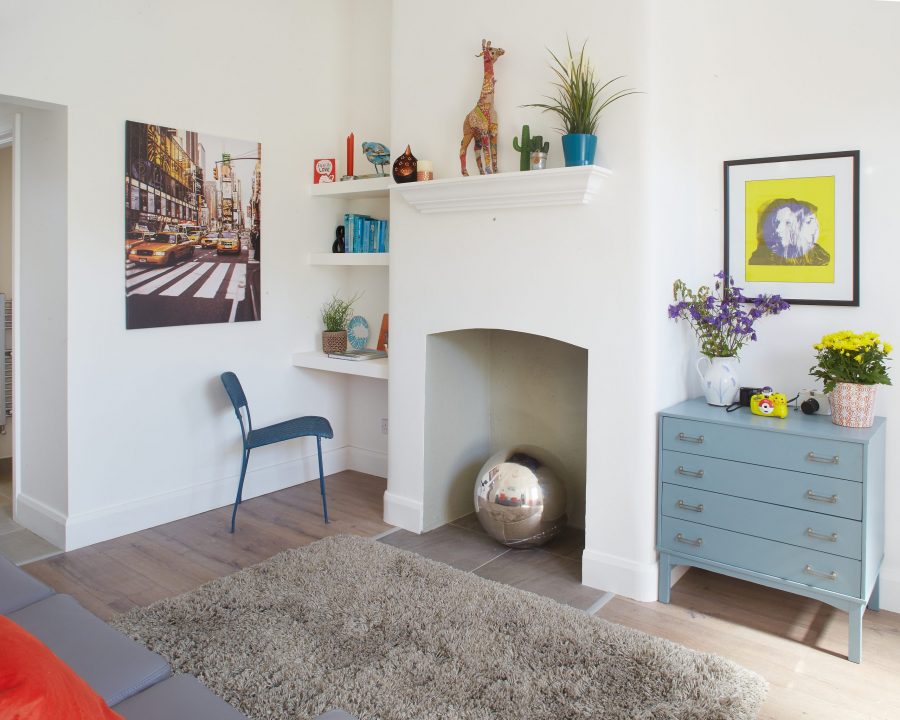 Bedroom and the shower room renovation

‘Another oddity was that the bedroom ceilings were also very high, so that the rooms seemed taller than they were long,’ says Julie. ‘Dad suggested dropping them and adding in an attic storage space, which is brilliant for suitcases and boxes. He was also a bit worried about how little space was left for the bathroom. Moving out the wall would have been expensive as it’s a structural outside wall, and Julian and I told him it wasn’t necessary. Most people take showers these days anyway.’ 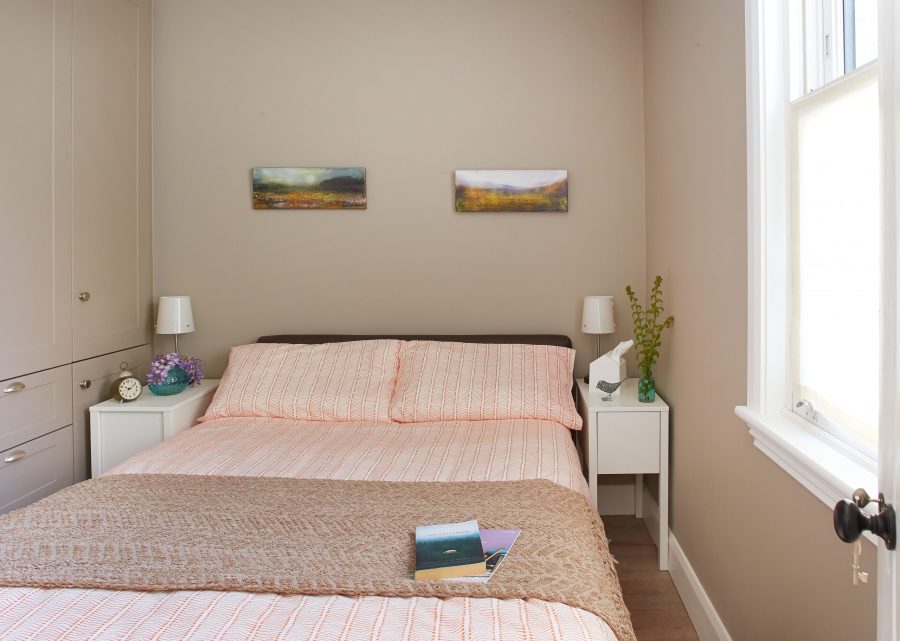 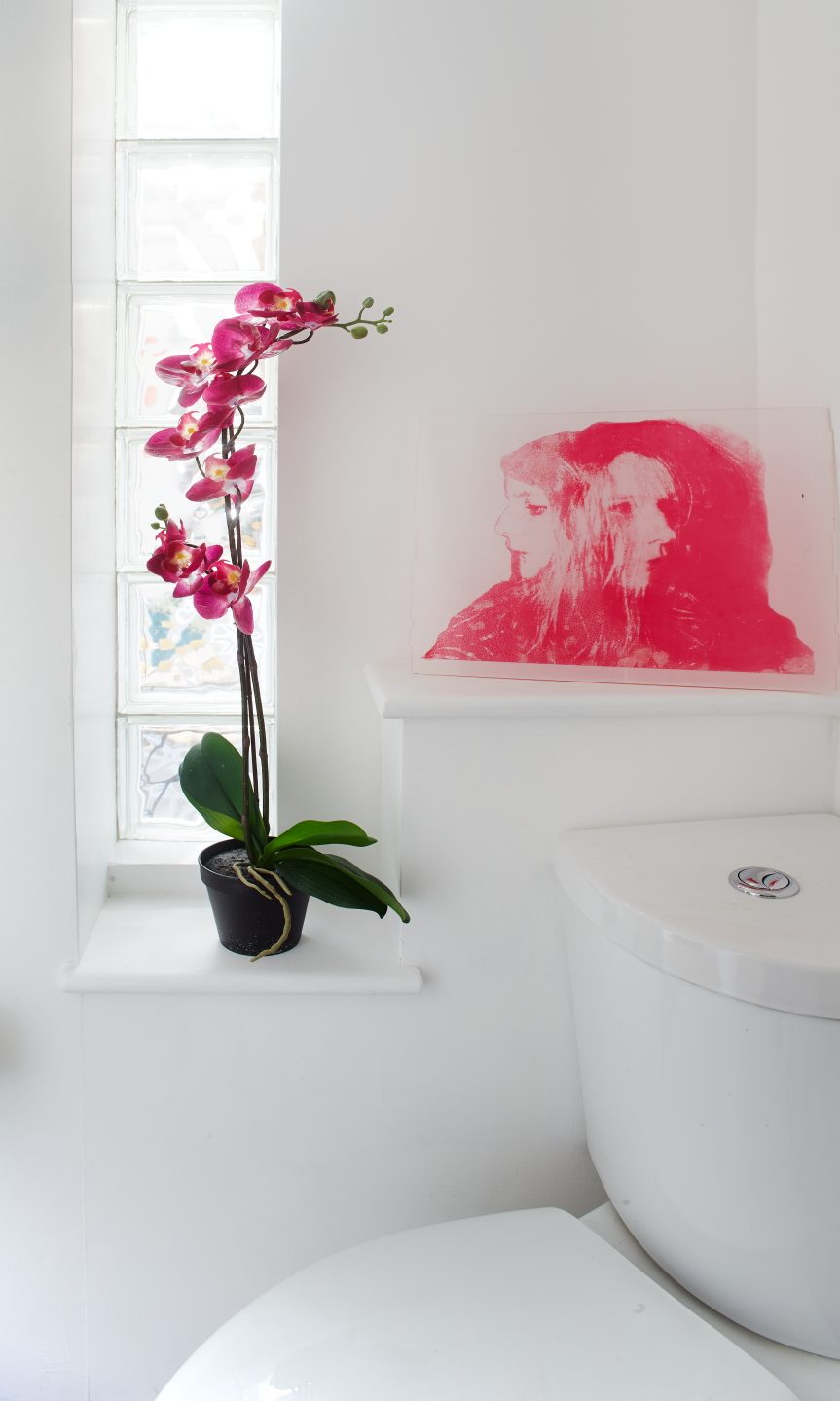 ‘There was enough space for a reasonable extension, so I wanted to add a really good, pleasant, bright kitchen’, says Wesley. ‘To block kitchen views from the sitting room, we put a floor-to-ceiling unit containing the boiler on the end nearest the door way. We used the full height, bringing the units up to the ceiling which provides extra storage in such a small house.’ 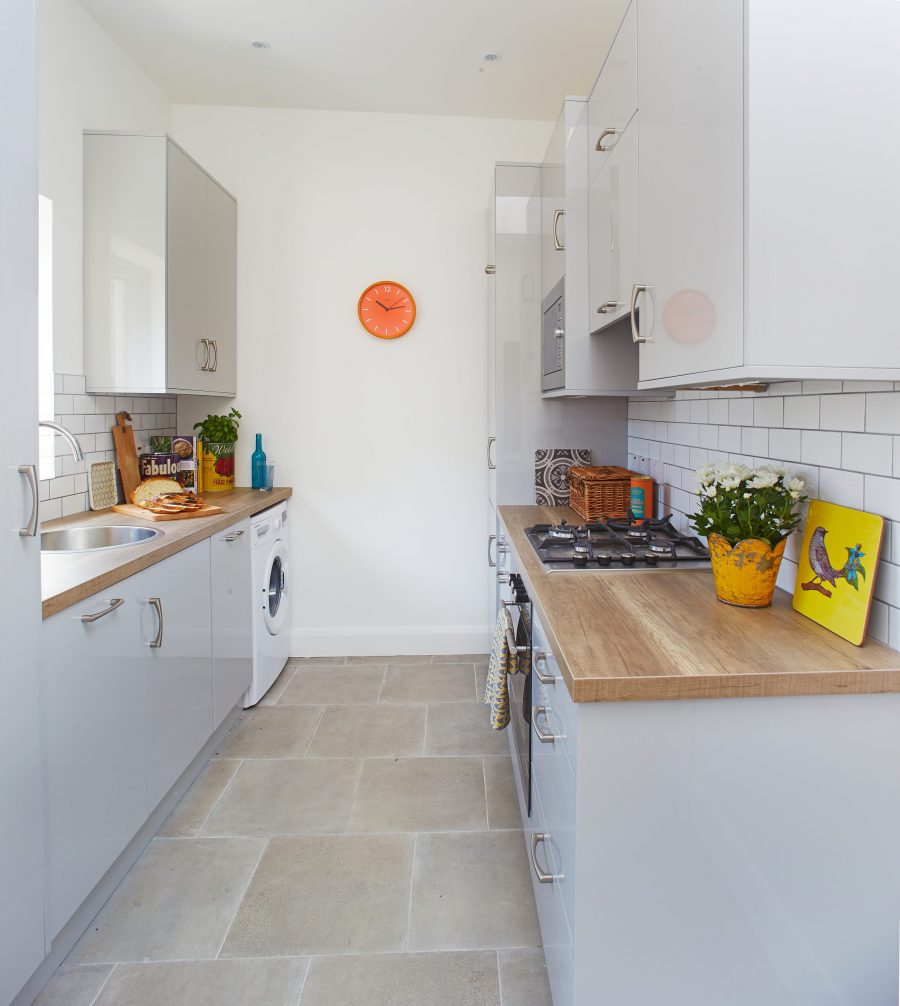 The building completed, Julie and Wesley set about making the house comfortable and giving it a unique identity. ‘We needed to make the most of every penny as we were on a minuscule budget, ‘ says Julie. ‘I prefer an eclectic look anyway, and we gathered together old and recycled pieces from markets and internet sites. We mixed them with IKEA and DIY store buys. I wanted a white background to showcase artwork and felt it would be a good background for such an eclectic mix. We wanted to make the bedrooms cosier and warmer so we talked about wall colour in them. I was surprised when he suggested the deep marine blue for the bedroom/study. It seemed very strong, but it was a stroke of genius, because it makes it a totally unique and separate space and actually contributes to making the house feel larger.’

‘It’s a really cool little house now,’ says Julie. ‘I love the location in the city, I can cycle everywhere.  ‘It’s very small but feels spacious enough for two.  I think that’s because there are very definable separate spaces, and even a small outside seating area.  We’re very happy here until we can afford to buy, our rental payments will provide the credit history while we wait.’ 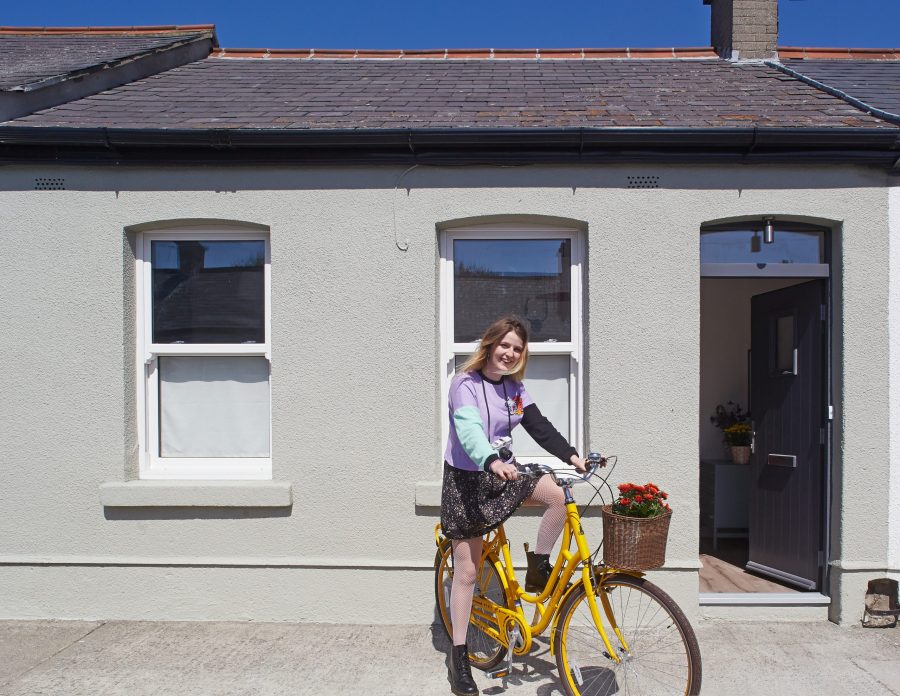 The wall between the sitting and bedroom has been rejigged to allow wall space for a 3-seater sofa. A white background colour has been used to display Julie and Julian’s eclectic collections. 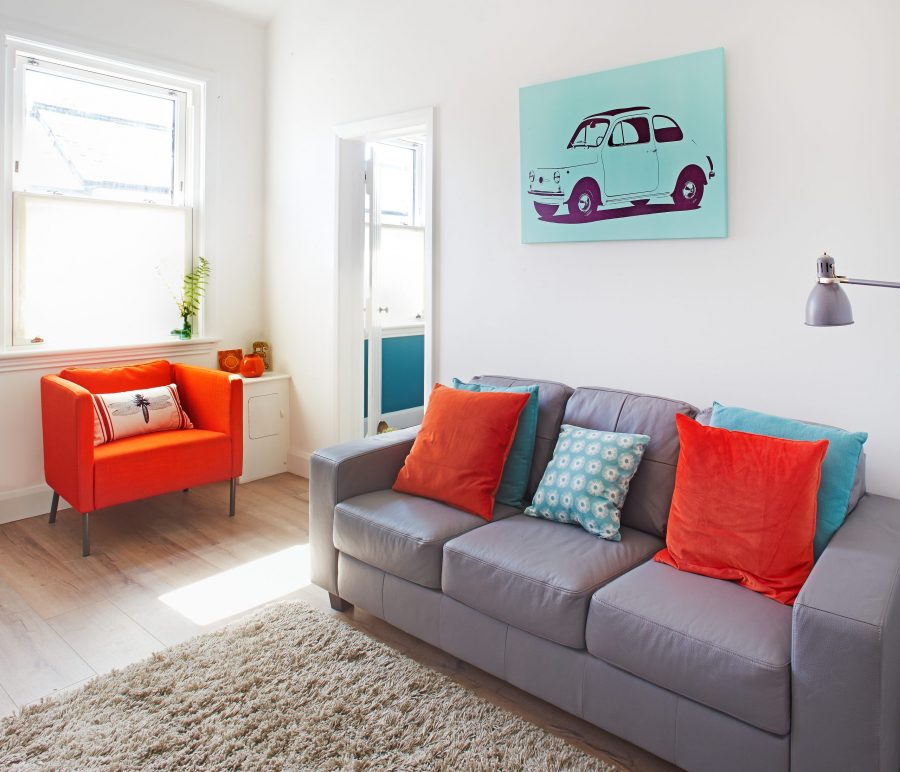 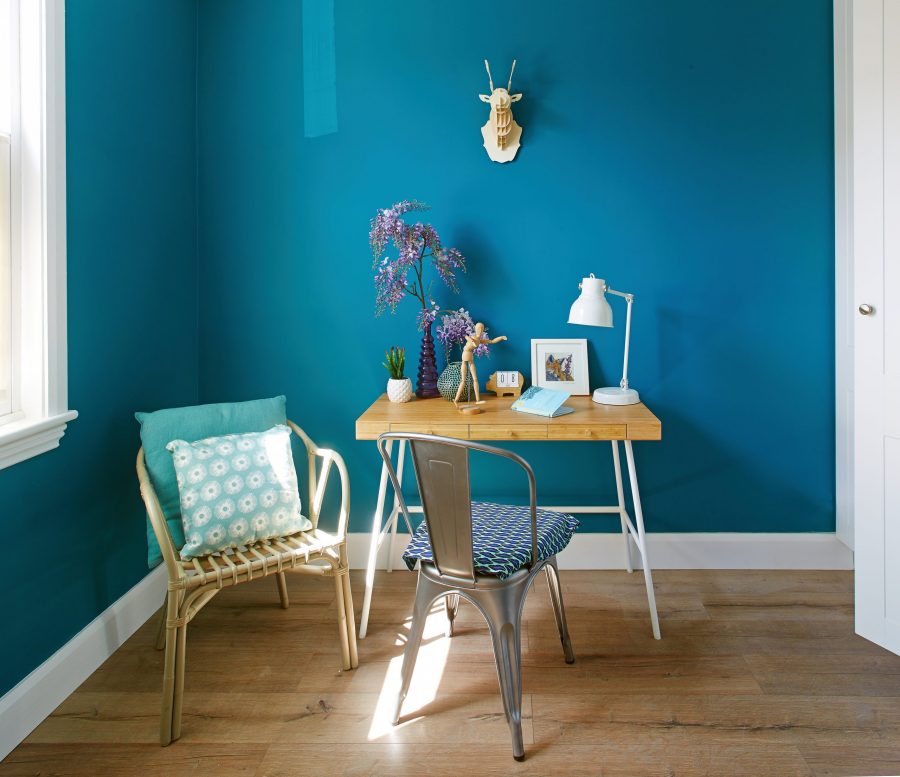 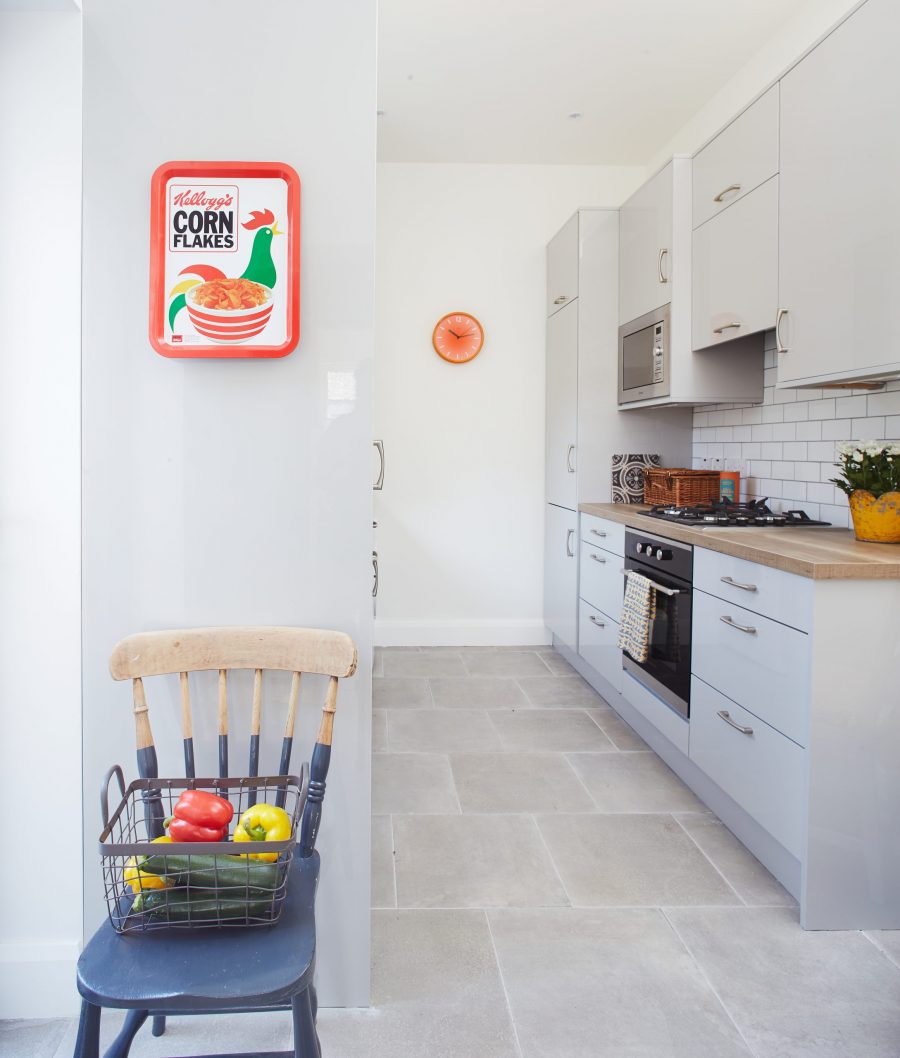 Julie bought the patio table for the seating area outside, but it fitted so well into this space, she decided to make it the dining table. 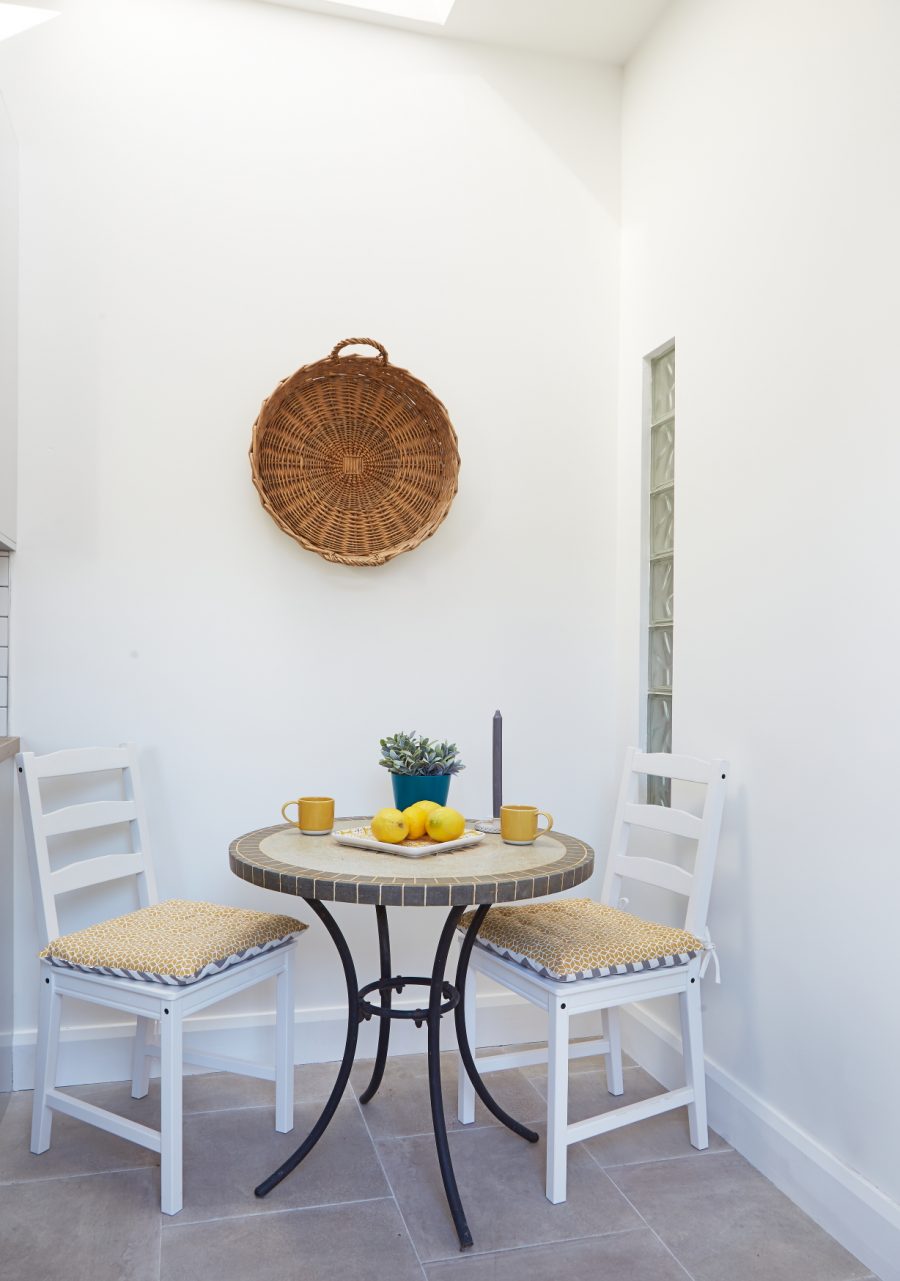 ‘The bedroom is small, but lowering the ceiling has made it feel more cosy. It works fine as a sleeping space and the storage wall makes it much easier to live in,’ says Julie. 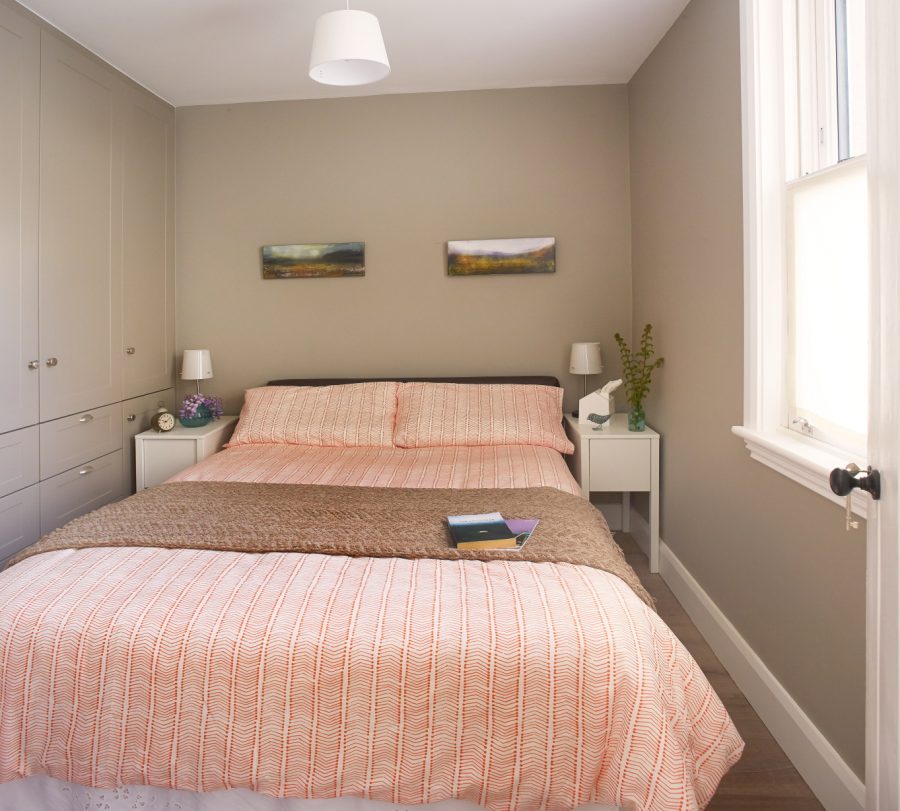 The small shower room was once the kitchen of the house, daylight has been introduced with glass blocks. 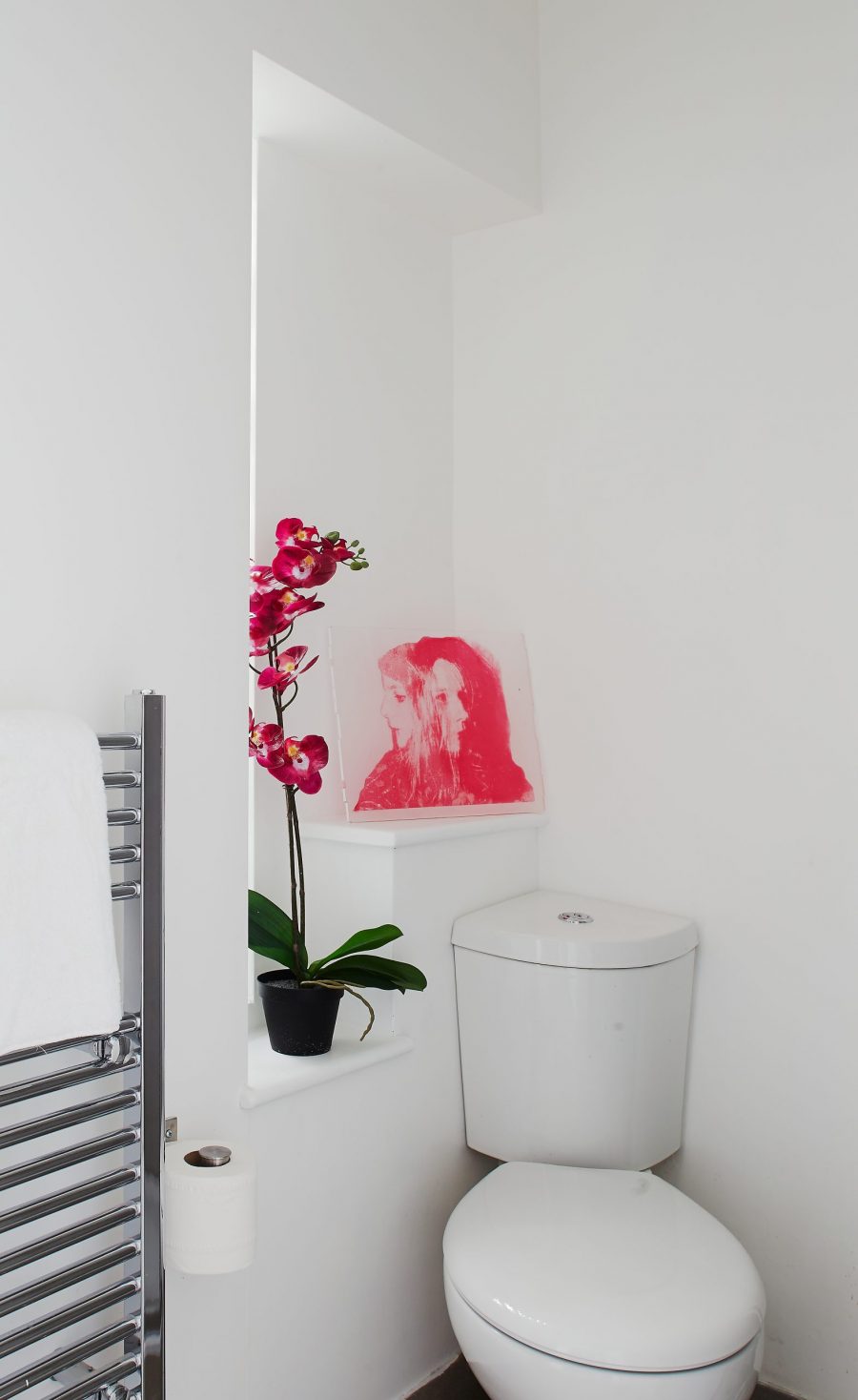 Doctor In The House