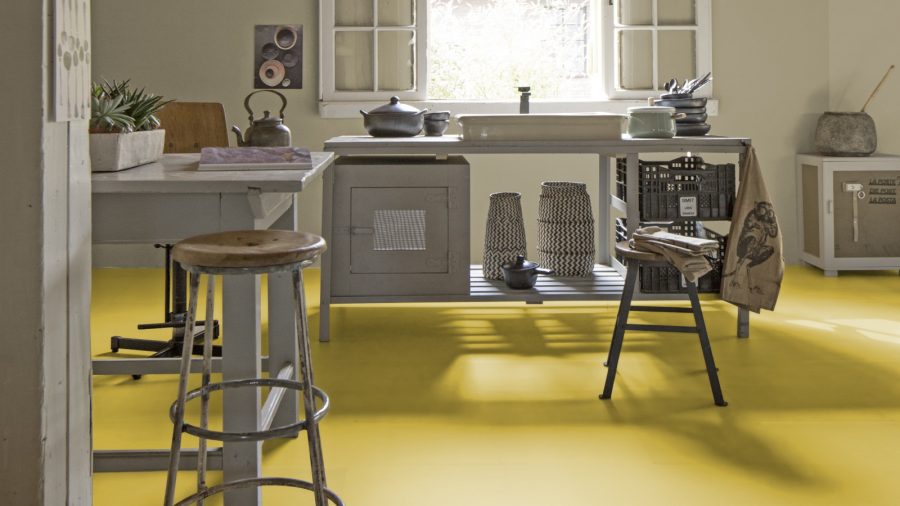 Please help! We are getting a new kitchen in our house and I would really like to have an all-natural floor finish, something tough, low maintenance and warm underfoot as we have toddlers.  I have been researching lino, as I have an idea it’s made from linseed, but any I’ve seen seem to be vinyl and not very nice.  I don’t want to be forced to go with tiles, can you provide me with an alternative?

Yes, I think you are going down the right path there, but the problem you are encountering is that traditional Linoleum or ‘lino’, which is indeed made from solidified linseed oil, with natural additives like cork dust (great insulation) and pine rosin (to stick it all together!)  on a canvas or hessian backing, has largely been supplanted by vinyl, made from PVC (plastic), which is cheaper and easier to produce.   So, if you search for lino in Ireland, what you will find is actually vinyl.

BUT, there is a product which may be perfect for you!  Marmoleum is a flooring product that is sold in Ireland and based on the traditional linoleum recipe of linseed oil. Forbo Flooring are the international suppliers, and Forbo Ireland are the distributors here.  It  claims to be ‘97% natural raw materials, 72% rapidly renewable, 43% recycled content ‘ on the Forbo website, so all good!  I asked the CEO of Forbo Ireland, Paul Carney, if the product would be suitable for a domestic kitchen with small children.

He tells me that Marmoleum is made with a natrual  linseed base, is carbon-neutral and biodegradeable, so environmentally, it’s pretty sound.  Carney also mentions that it is ‘bacterially static,’ which I don’t understand and ask him to explain.  It means bacteria doesn’t grow on it, say in humid conditions……think shower curtain? The black mold which can appear on them?  A kitchen can be humid, so ‘bacterially static’ is good.  He also mentions that Marmoleum doesn’t harbour dust mites, and has a Seal of Approval from globally recognised British medical charity, Allergy UK.  ‘Marmoleum is perfect flooring for children’, is Carney’s conclusion.

From  my own experience of the product I would tend to concur.  It’s pretty widely used in used  in schools and nurseries, hospitals, sports facilities, leisure centres, hotels and retail outlets.  It’s very tough and non-slip, warm underfoot.  I haven’t seen it used that often in homes, but I have seen it. It comes in 2-metre-wide sheets which are welded together, and can be turned to run up a wall replacing the skirting board, although Carney is a little startled at the idea of using this feature in a domestic application, I have seen it done (a lovely home renovation in Navan.) This gives a dream low-maintenence finish!

Enough with the words, what does this stuff look like? Actually, you’ve probably walked on it often in doctor’s surgeries, hospitals, shops and swimming pools, but the good news is that it seems to come in an endless array of colour and pattern.  And by the way, before you think that if it’s used in those application it’s probably hugely expensive, Carney assures me you kitchen Marmoleum would retails around €45-€50 per square metre, plus VAT, which is not that bad.

So what the link below does is to offer you a series of photos of different rooms, (in your case pick kitchens, and select the one most like your style), then you can change the wall colours, and select any Marmoleum that takes your fancy in any colour or pattern, and there are some mad colours up there! The project in Navan I mentioned earlier was deep purple…

CHECK THIS LINK OUT! 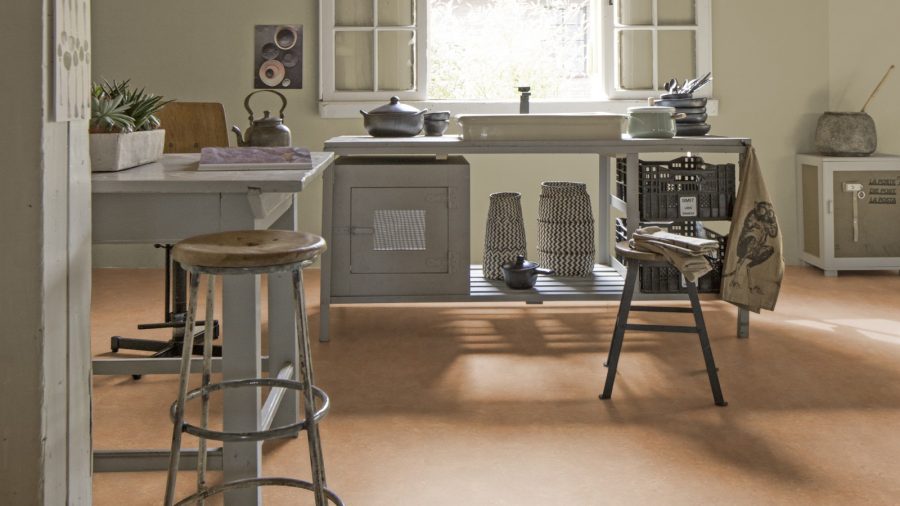 So I liked this colour, Marmoleum Shitake, but lets see how a stronger colour looks? 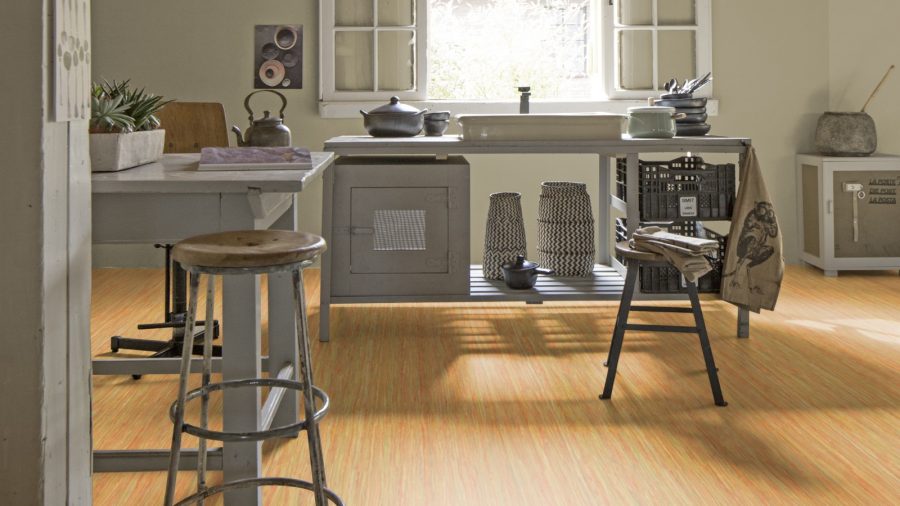 Or a different colour entirely? 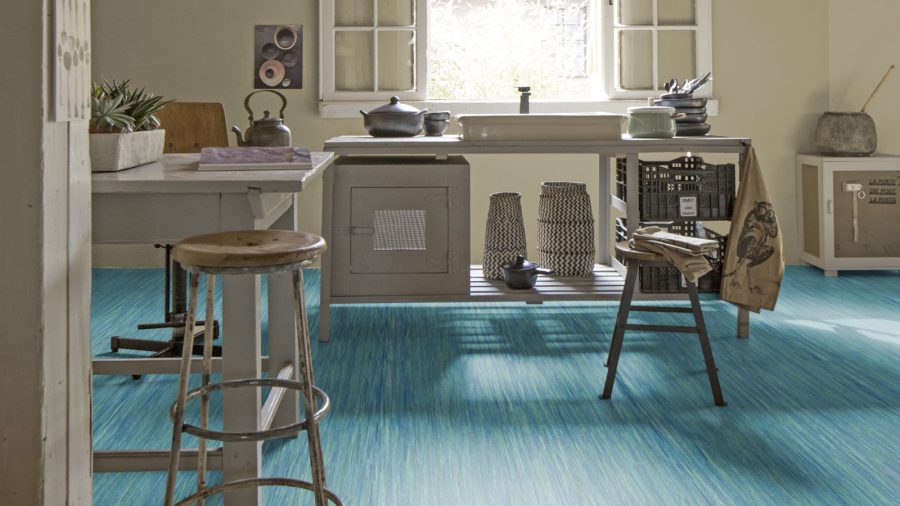 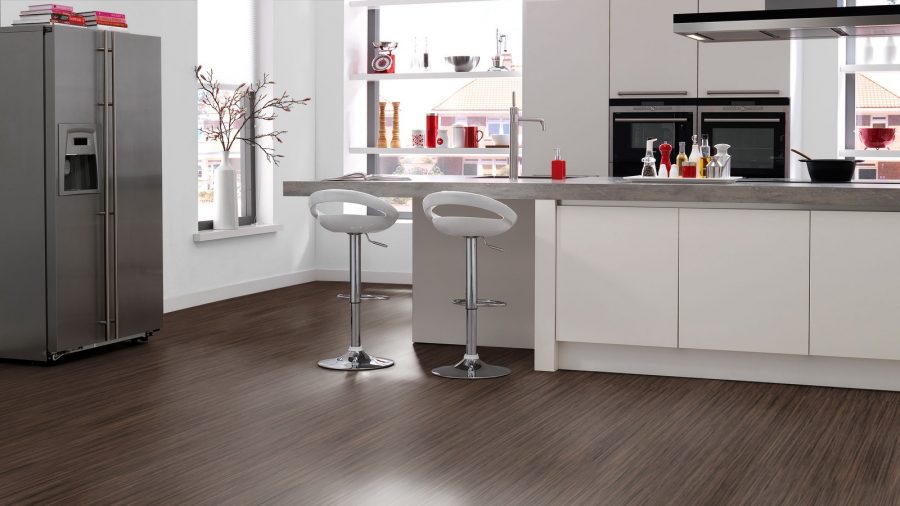 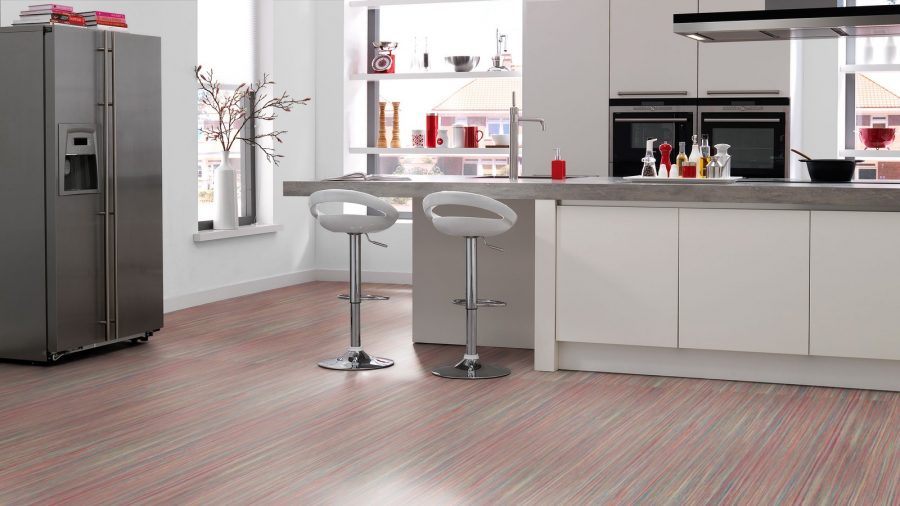 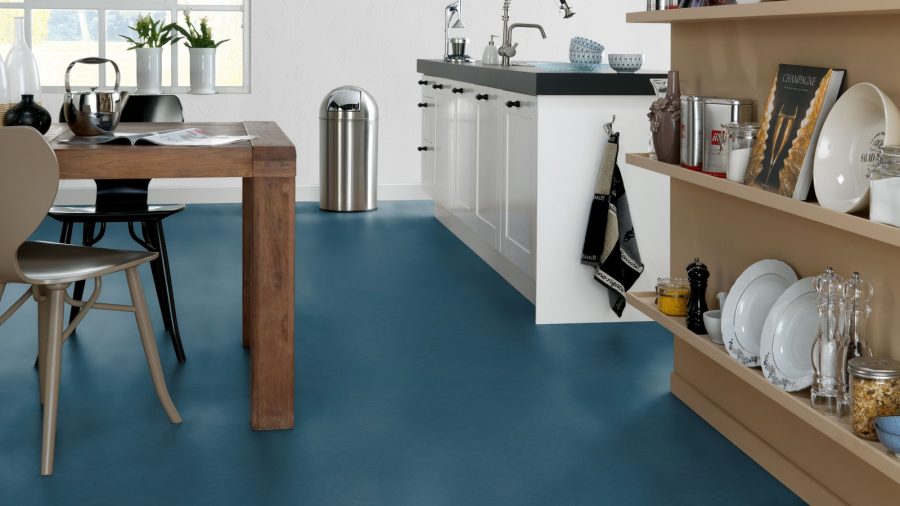 OK, so you get the idea.  Right, so next up I talked to an interior designer who does use Marmoleum in homes; specifically in kitchens.  Her name is Linda Moffitt and her company is Vision Interiors.

‘Marmoleum is the perfect answer for Jill,’ she says. ‘It’s a natural product, very durable, easy to clean and great for small kids crawling…it’s warm to the touch and has no sharp edges. It’s also ideal if you have underfloor heating, it is only 2mm thick and doesn’t move with heat. The subfloor (underneath the finish) does have to be really perfect , although the contractors will level the floor with levelling compound as part of the fitting.  Marmoleum is long-lasting, doesn’t require maintenance and is good for high traffic areas.’

A real home project in Dublin

Linda used the product in a project in Griffith Avenue in Dublin, where the floor area was extensive, covering the kitchen, dining and living rooms in an open plan format.  ‘The homeowners wanted to use Marmoleum for toughness and low maintenence, but in such a big area I wanted to introduce another colour to break it up,’ explains Moffitt.  So this is antoher interesting feature of Marmoleum; you can create your own patterns.  The floor finish is made of sheets welded together, so the sky is the limit.  ‘Although the more colours and bespoke pattern you introduce, the more expensive it becomes, between buying, cutting and welding,’ cautions Moffitt.

Linda used a blue curving wave motif on the grey base Marmoluem colour, but you can design anything you want. ‘I genuinely do love working with the product, it’s easy to use, has a wide application and there are a huge range of colours,’ she comments.  ‘The visual application on the website above is very useful, but you really really do need to have a sample in your hand to see the colour and texture.  You can order samples directly from Forbo, or from the supplier. ‘

You can indeed order samples from the friendly and helpful staff in Forbo, and then order the product in at your local flooring supplier; Marmoleum is not stocked in shops, but comes in on order only.  If you want help and advice, you can ask Forbo to put you in touch with one of their four regional reps.  An easier way may be to ask advice from one of Forbo’s approved fitters, who can then order the product and fit it too.  Click the button below to download a list of fitters approved by Furbo.

Find a fitter near you…

Real-Life Marmoleum in the Home

So, since we posted this feature, de Bruyn Flooring in London, who are Marmoleum suppliers, have contacted us to show us different patterns that can be employed in the home with Marmoleum. These photos have been sent in to them  by various fitters who are (rightly) proud of their work! If you have any similar photos, please send them in and we will add them to the gallery.  We would love to see photos from fitters in Ireland! 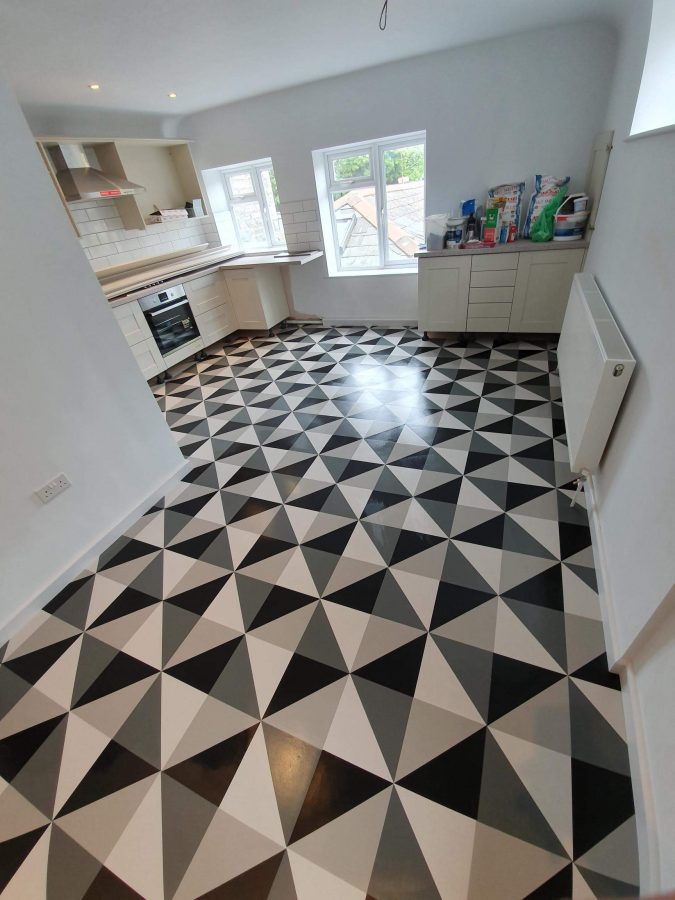 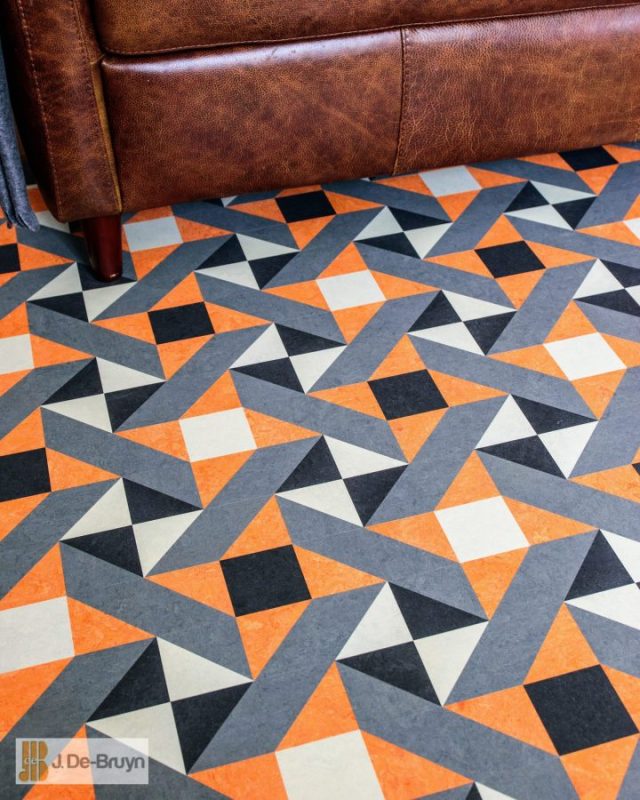 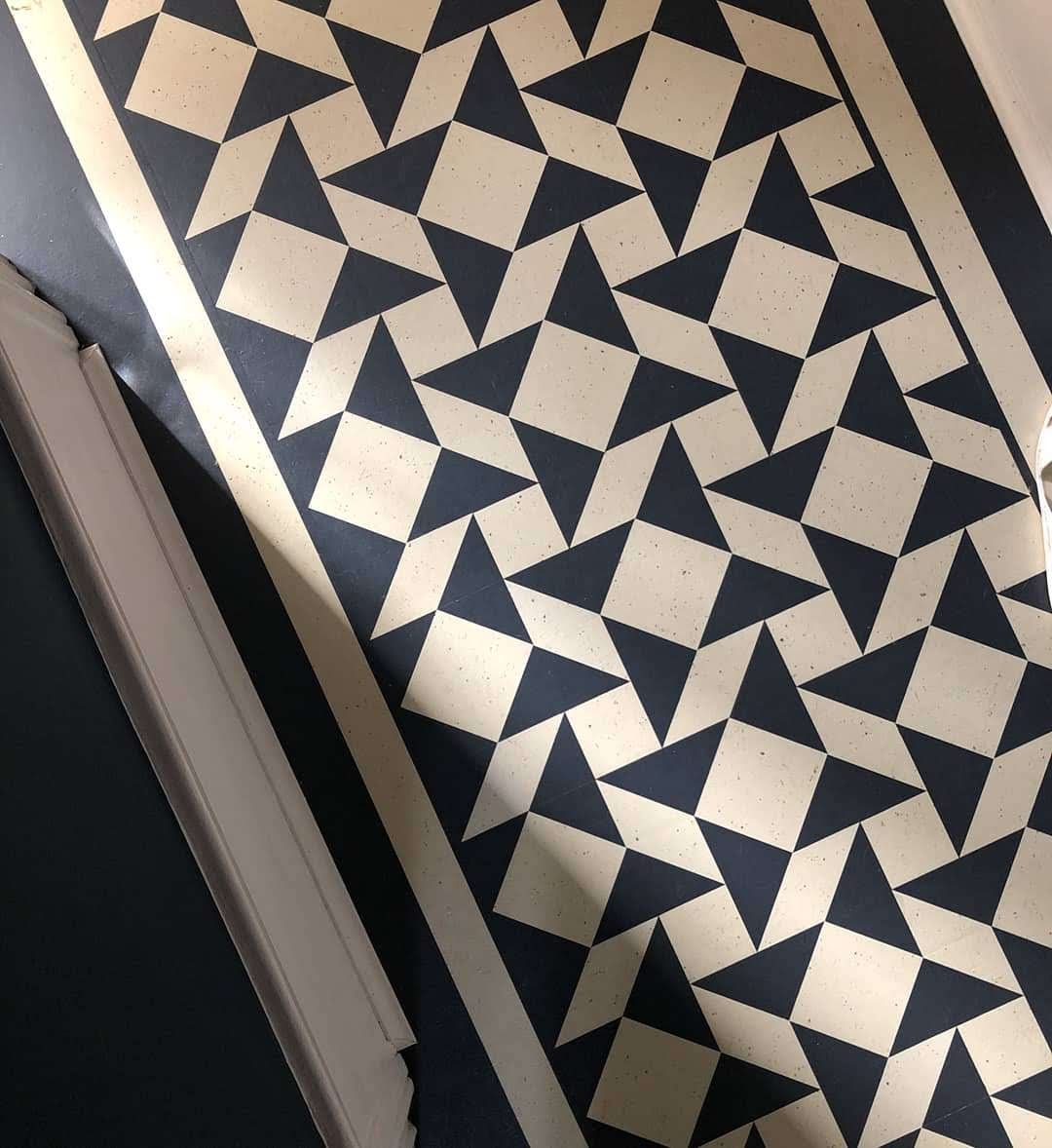 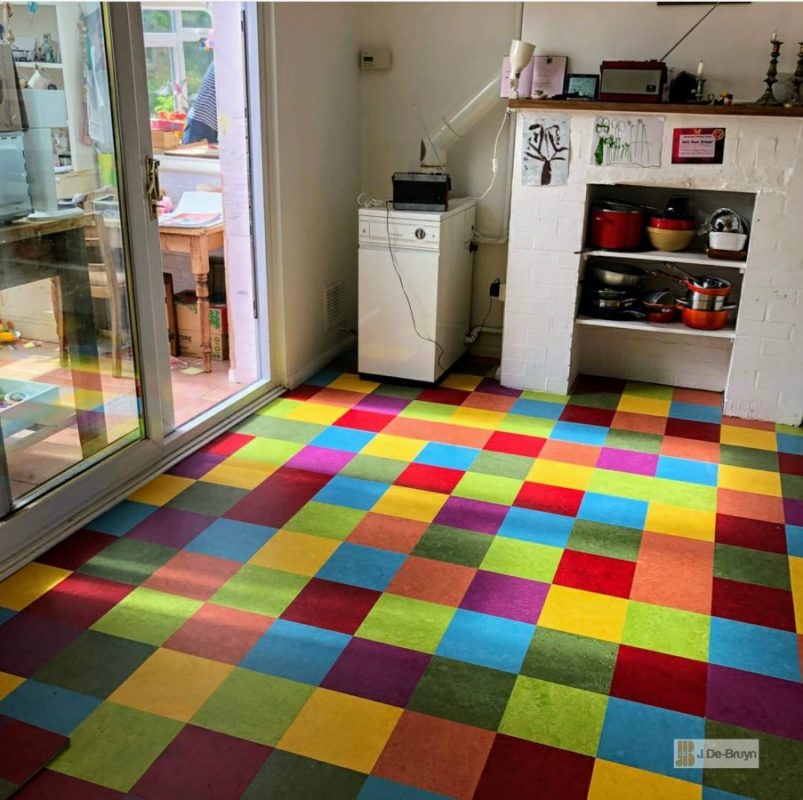 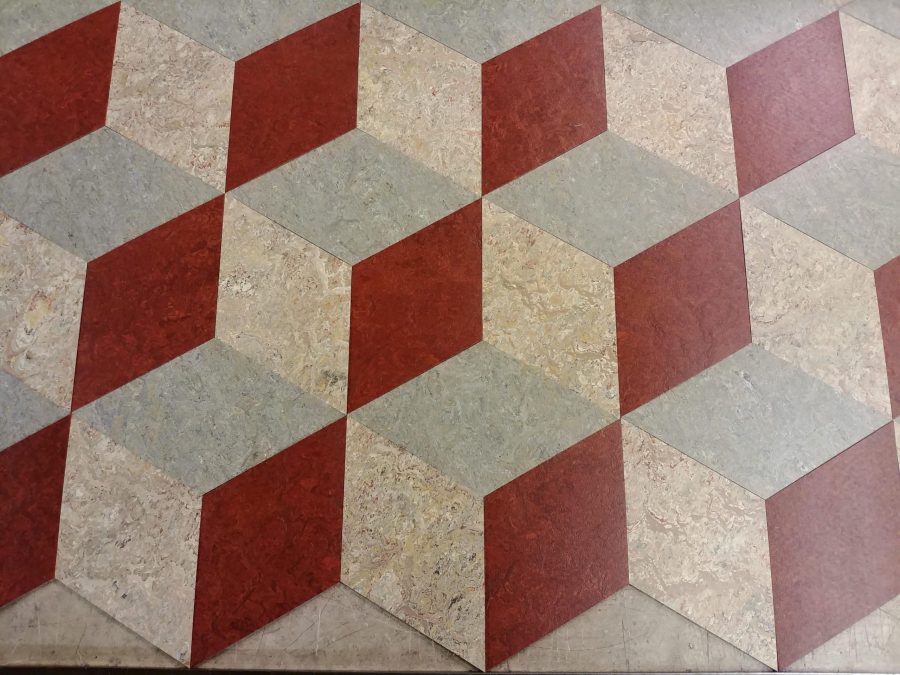 This is not a sponsored post, or advertisement, I will only endorse products I believe in.  All information is correct to my knowledge at the time of posting and all opinions are my own.  When making purchases or adjustments to your home, it’s a good idea to ask for professional advice!  Barbara Egan Design Sushi Magazine.