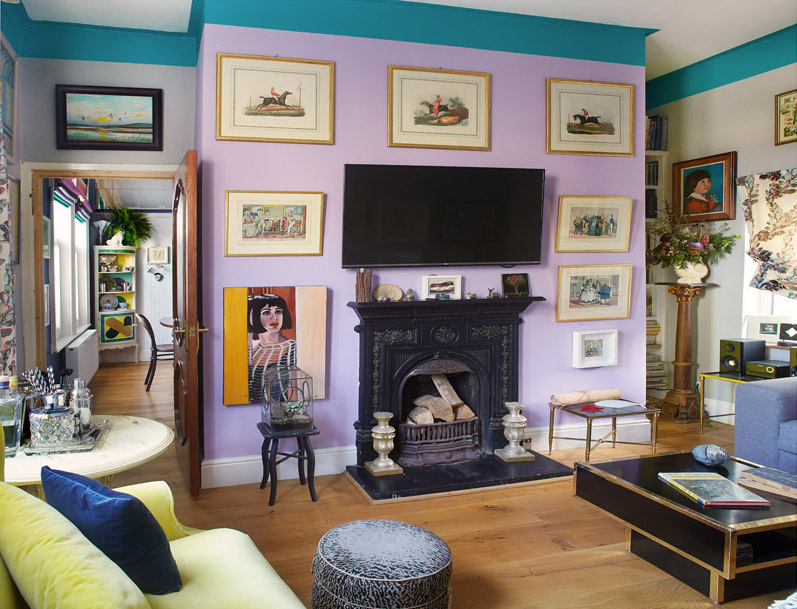 Paddington Bear’s house, the mask of Tutankhamun, Eileen Gray lacquered screens and early Georgian interiors; these are among the inspirations for historic conservation specialist Erica Devine, who created  a playful and unique décor in her Victorian home in Bray, Co Wicklow.  Read on for fantastic ideas on creating beautiful mise-en-scene in your home!

Different from the rest

A former Assistant Conservator to the National Trust in the UK and a consultant in historic object conservation to the OPW, Waterford City and Malahide Castle among others, Erica Devine is an expert on recreating a perfect period interior. But she had different ideas for her own home. ‘I do love Georgian style, but also the clean lines of Mid-century design. I wanted to combine antiquity and modernity in a melting pot, a series of little mise-en-scenes rather than a matching interior scheme, and I wanted to create a little gem, a home and a party house.’ 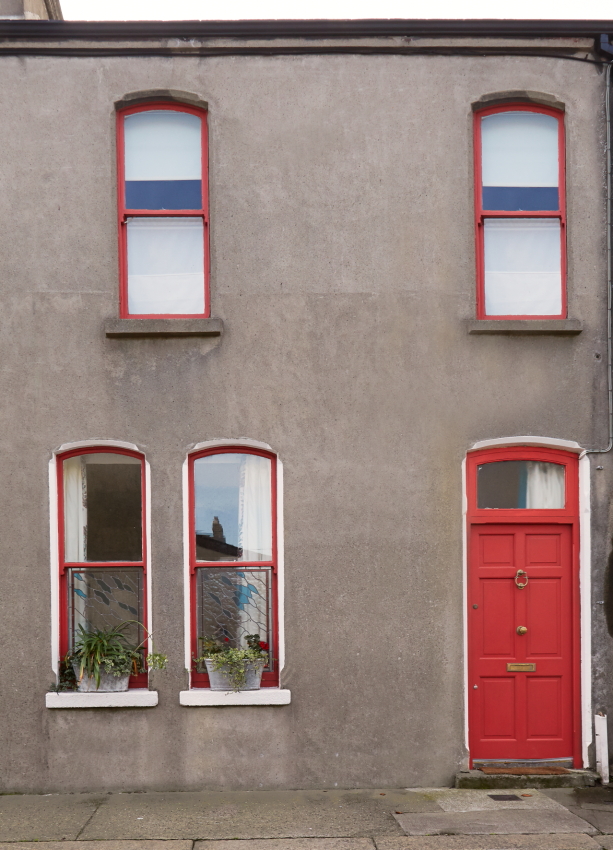 Bray - the Home of vikings

Before Erica and husband Sean decided to take the leap into homeownership they rented a house nearby, but Erica was ill-at-ease in a cramped space with bland, featureless decor. ‘I knew I wanted to live in a period home; I like the sense of history and the feeling of being simply a caretaker, part of a bigger story.’ Erica also knew that she wanted to live in the seaside town of Bray.  ‘It has a sense of fun, and I loved that it stands between the sea and the mountains, I felt that was right for me; that must be my inner Viking calling!’ she says . 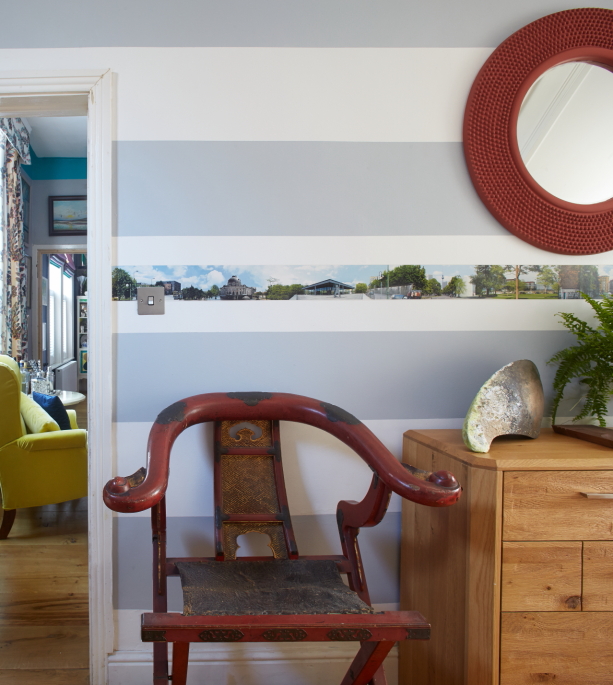 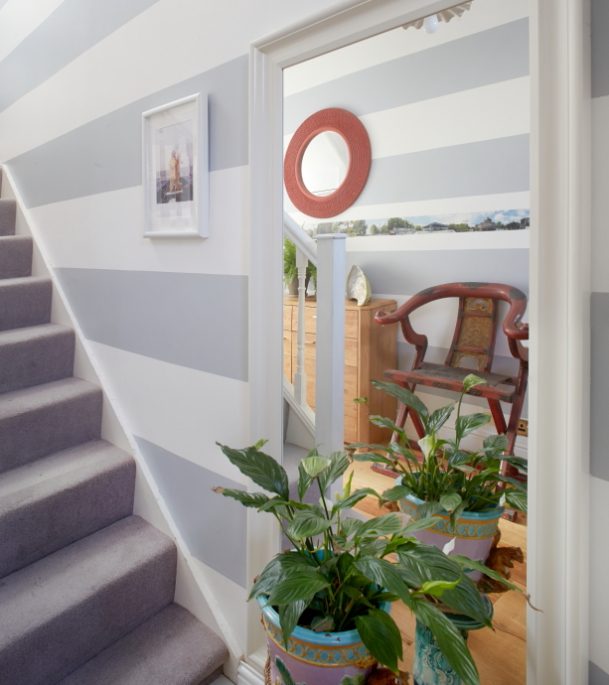 ‘We loved this terraced house from the off, I liked the character  and the sense of space from the high ceilings and period proportions,’ says Erica.  ‘When I came in the front door of this house, light poured down the stairwell from the double-height space and I was sold instantly.’ But the couple didn’t feel that they needed a four-bedroom home. And the price was more than they would  pay for the smaller house they were really looking for. So.. they came up with a unique solution; they bought a half a house. ‘My friend was also looking for a similar property, so we decided to buy together, and then split the deeds,’ explains Erica. Financially this was a masterstroke. They ended up paying about half what they would have paid for a regular two- bedroom home. 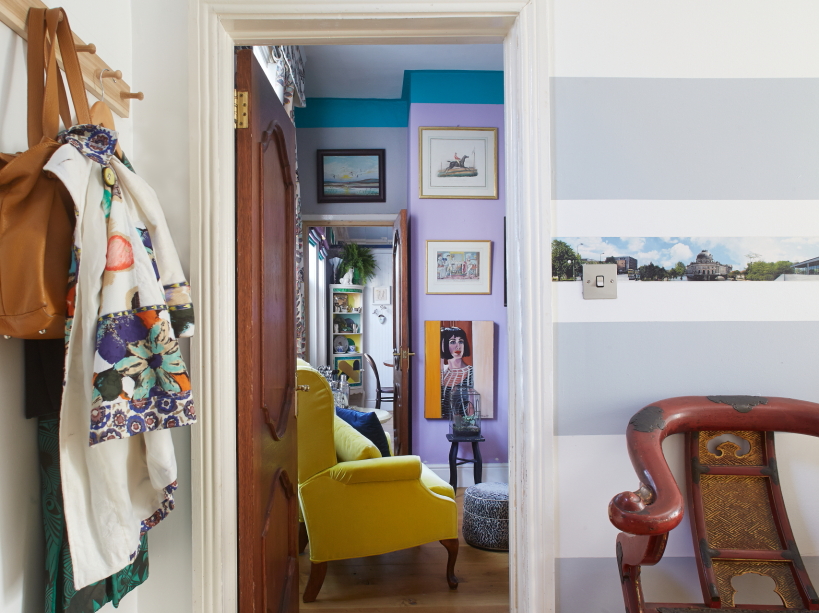 the winds of change

The décor in thier new home was brown carpet and magnolia walls throughout.  ‘The kitchen badly needed replacement and there wasn’t a straight wall in the house, so austere perfection was definitely not a design option!’ says Erica.  An access corridor ran the full length of the ground floor at the rear, which was now made redundant by the permanent division. The first thing the couple did was to remove it, enlarging the kitchen and sitting rooms. They replaced the mix of concrete floors and damaged original pine with reclaimed oak flooring throughout from Kingswood Architectural Salvage, but decided to keep the original single glazed sash windows. ‘I love them and didn’t want replacement imitation double glazed sashes,’ says Devine. ‘Instead, I built up a collection of great quality Foxford rugs from charity shops and sewed them into interlining for curtains.’ 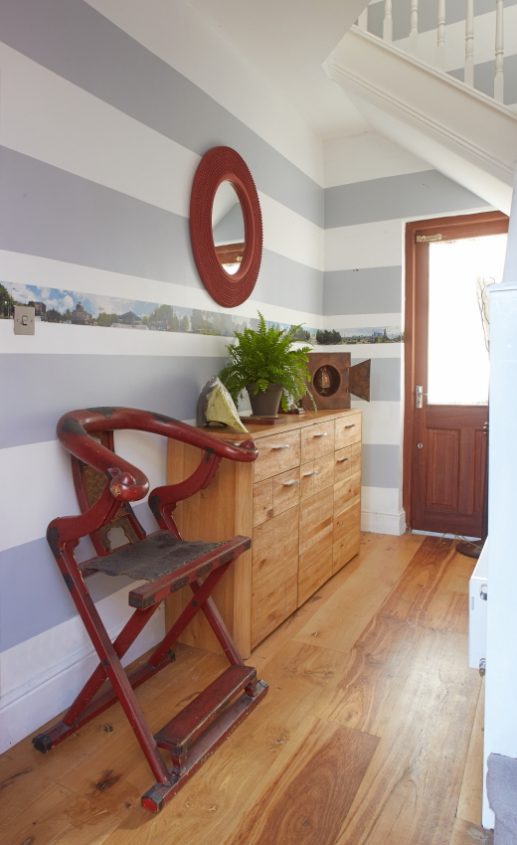 The double-height entrance hall had sold the house to Erica. She wanted to emphasis the light and height by leading the eye upwards from the moment you stepped in the door. ‘The scheme started with the Berlin panoramic strip, a custom-made Tapete wallpaper strip we bought on holiday in Berlin. Then I needed to create a surrounding for the strip. So I decided to lead the eye upwards in a series of horizontal stripes inspired by those on the mask of Tutankhamun,’ says Erica. ‘All the interiors in the house came about through an organic growth process, rather than starting out with a ready-made design.’  The Chinese travelling chair in red lacquer came from Florence Antiques in Bray.  ‘I love lacquer, Eileen Gray was a big proponent of the look and created fantastic furniture and screens using the finish.’ 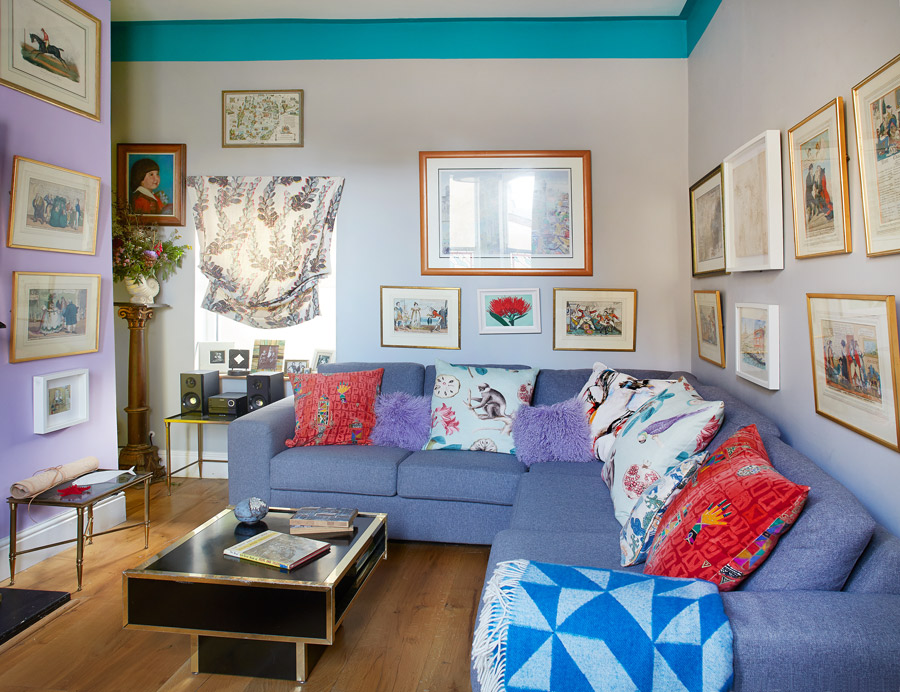 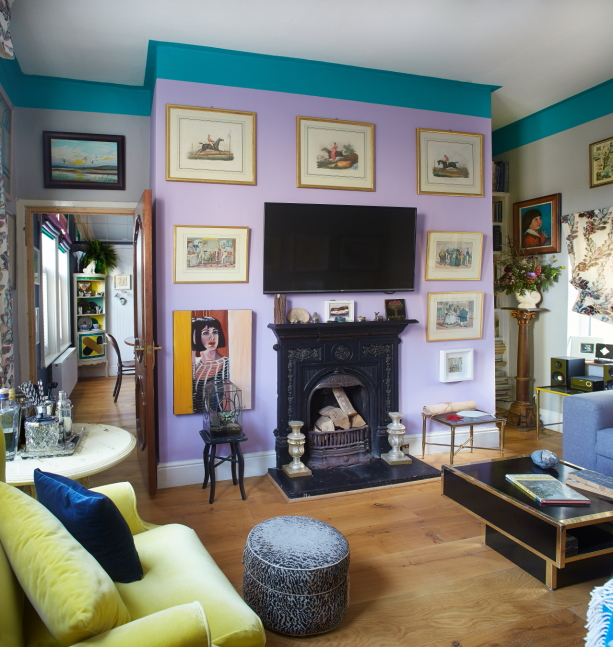 The sitting room evolved around the fabrics that Erica has been collecting for years. ‘In all my favourite reds, mauves, turquoises and yellows. I wanted to use them all!’ she says. ‘I had to balance the fabrics with the wall colour. Then I humanised the scale of the high ceiling by adding in the turquoise strip above picture rail level.’  The sofa is Furninova from Arnotts, and Erica made up the cushions from fabrics including the red vintage Louis Féraud and ‘Capuchins’ by Sanderson from Martin Hudson and Gibson in Sandycove. Erica also bought the 1960s French coffee table there. ‘I wanted to add glints of gold throughout the room to reflect the light and create a jewel-like colour scheme’, she says.  The rather fantastical swan-base table with Scagliola top came from Buckley’s Auction Rooms in Sandycove. 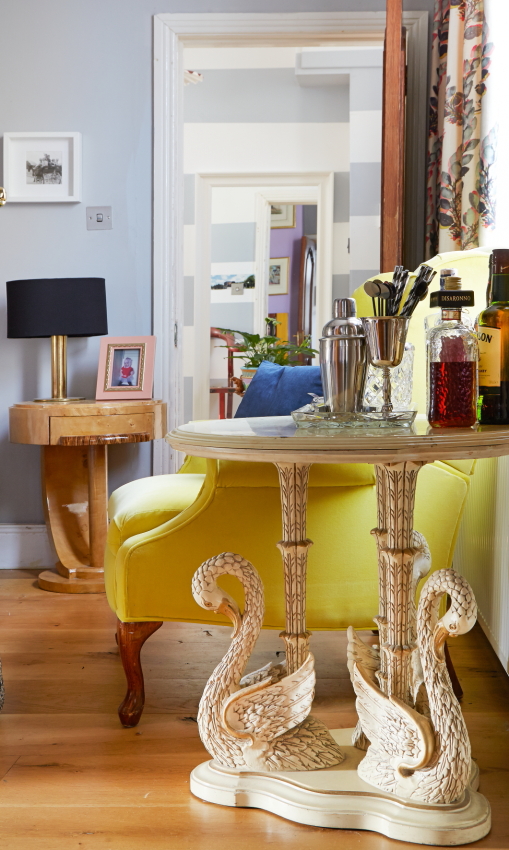 Originally the kitchen would have led into the other half of the house, but was now blocked off. ‘I decided to give the wall texture with a tongue-and-groove panelling and then added the mirrored tiles from Ikea as a sort of infinity perspective’, she explains.  She then added a brand-new Ikea oak kitchen, and treated herself to a large-scale marble tile splashback from Fired Earth.  Not wanting to clutter the splashback with sockets, Erica opted for simple pop-up electrical socket towers set into the worktop, a brilliant solution. 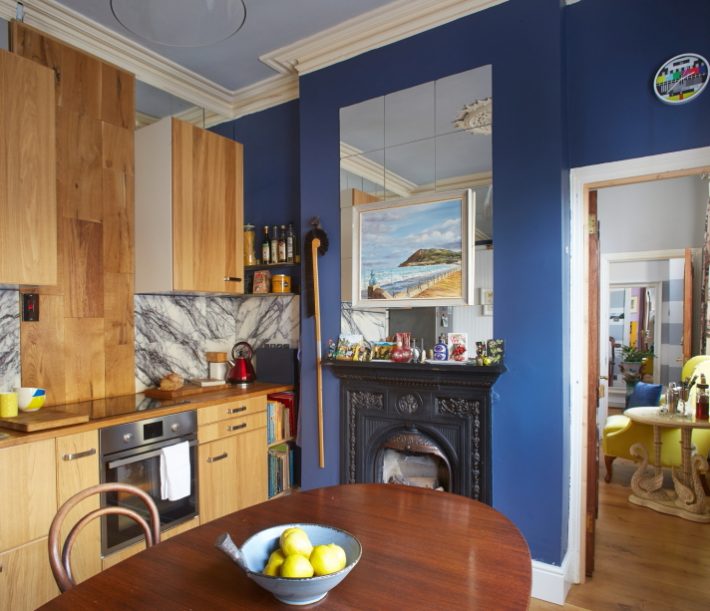 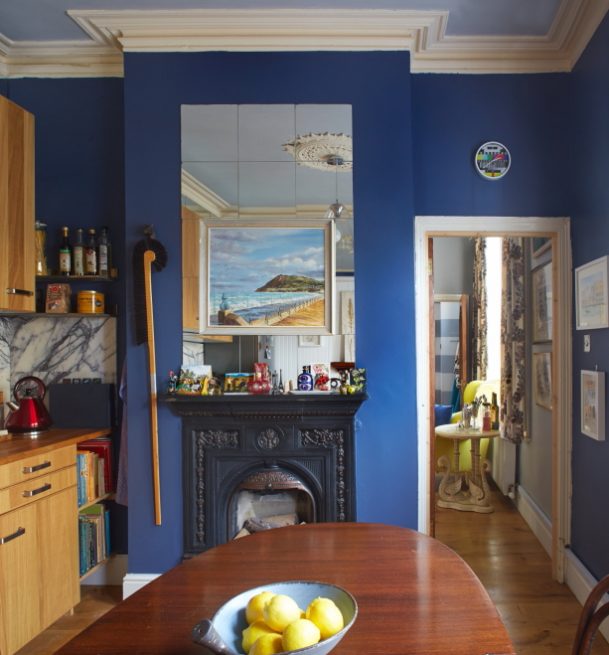 The end wall is painted in a very rich, deep blue from American paint company Benjamin Moore sourced in MRCB Paints. ‘I wanted this to be an evening room, with a bit of glamour for dinner parties. This blue contrasts beautifully with the marble and looks amazing by candlelight,’ says Devine. 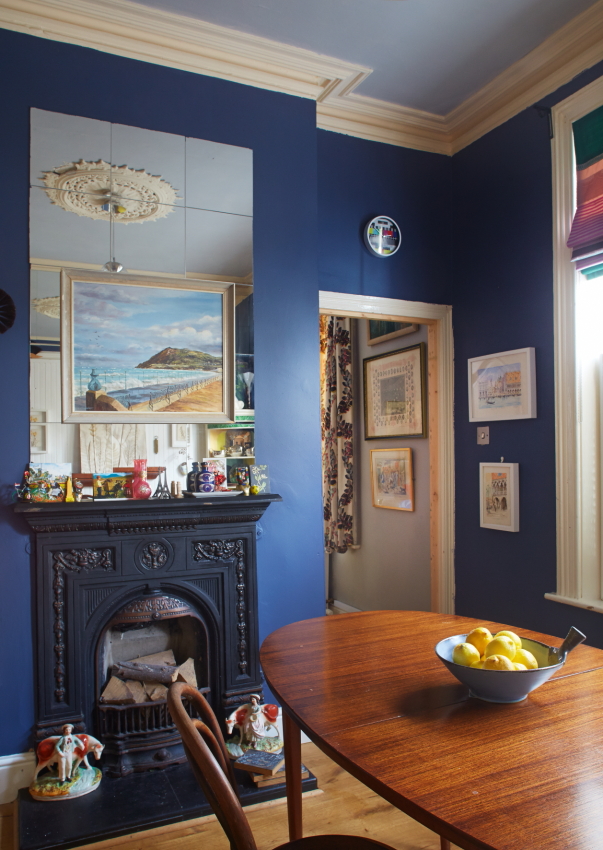 Upstairs was the identical long corridor that the couple had removed below, but Erica decided to retain it here. ‘I liked the perspective and eventually I’ll add a mirror to the end to further increase the feeling of space,’ she says.  Her initial inspiration for decorating the corridor came from a similar space in Paddington Bear’s house in the film Paddington 1, in which the walls were covered with paintings and prints, then she fell in love with the Harlequin wallpaper (‘Punchinello, from Cole and Son). ‘I felt it had a carnival theme which reminded me of Bray, the seaside, the promenade, the bandstand, the amusements’, says Erica. 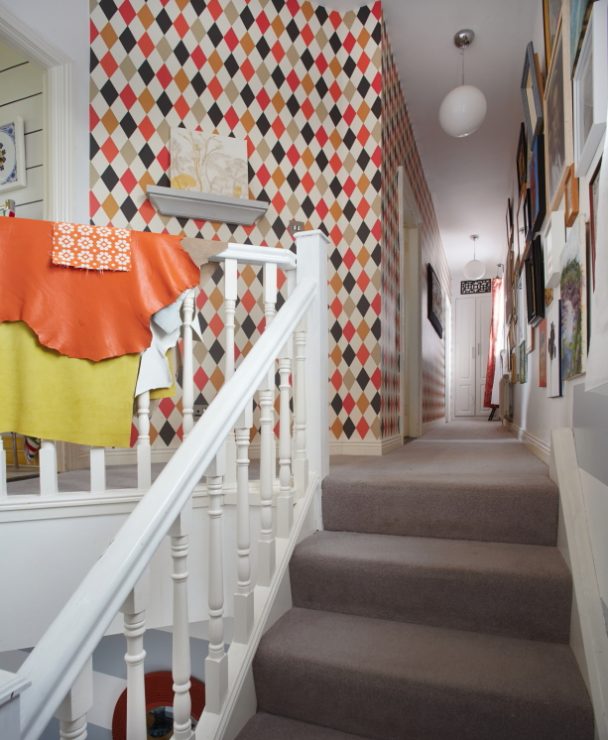 Erica is hand painting the bedroom with a canopied effect, which brings to mind some wonderful huge tent in a land where kings, queens and unicorns live. ‘It’s painted a sky blue, to bring a feeling of space and the outside into the room,’ says Erica , laughing. But the canopy and silver trees feel like a fairytale….

The colour is Buzz Blue, from Fleetwood’s range for children’s rooms. Erica iis still working on the Chinoiserie effect, which will eventually cover the ceiling as well as the walls. An embroidered rug used as a bedhead enhances the nomadic look. 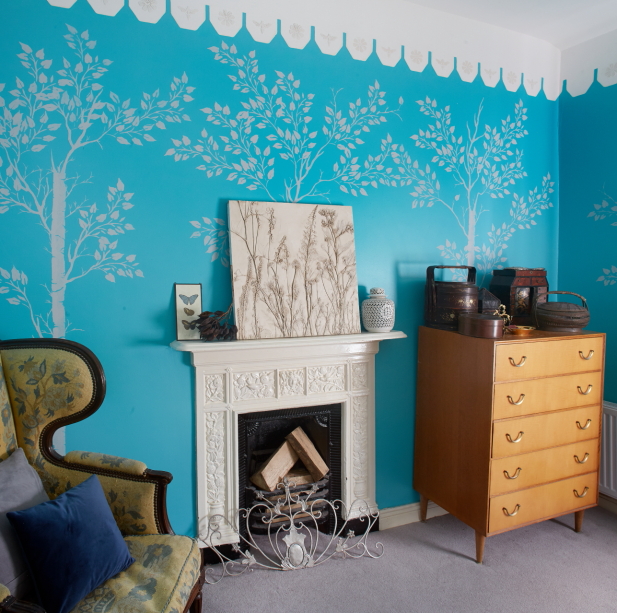 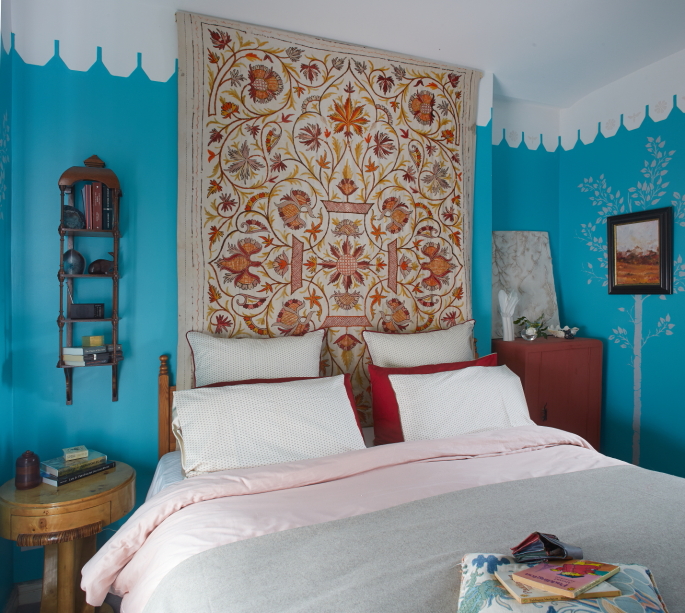 The bathroom is dominated by a reproduction of Roy Lichtenstein’s Waterlilies from the Museum of Modern Art in Edinburgh. ‘It’s a very cartoon-like, two-dimensional art piece; two dimensions is about as much as I can cope with first thing in the morning!’ says Devine.  The yellow walls and over-scaled perspective of the wood-effect floor tiles also plays with the dimensions and perspective in Van Gogh’s Bedroom at Arles. 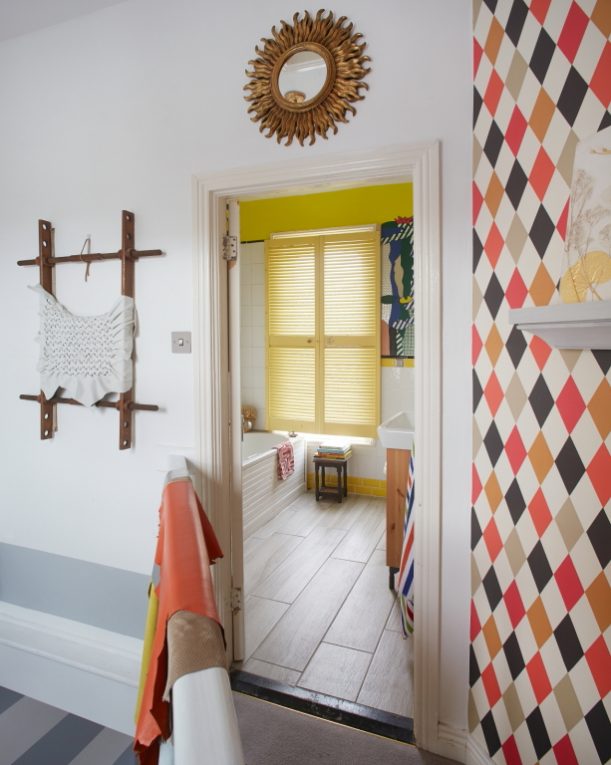 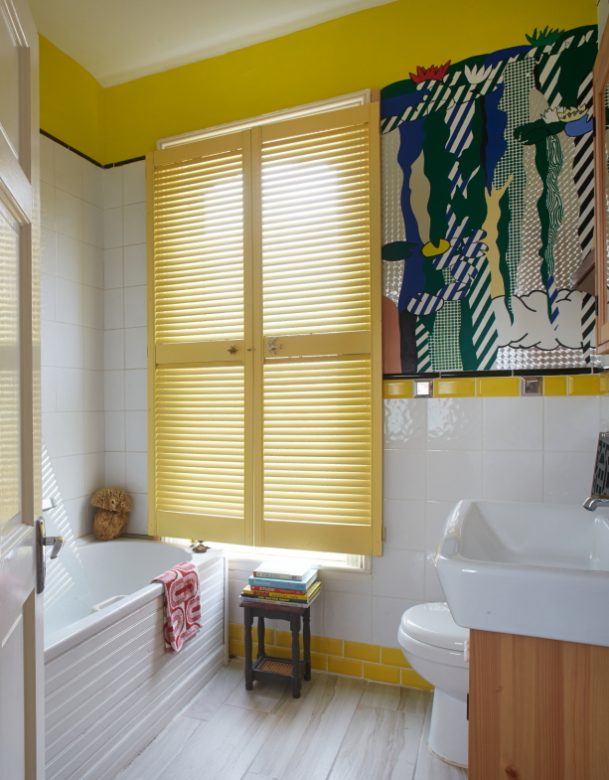 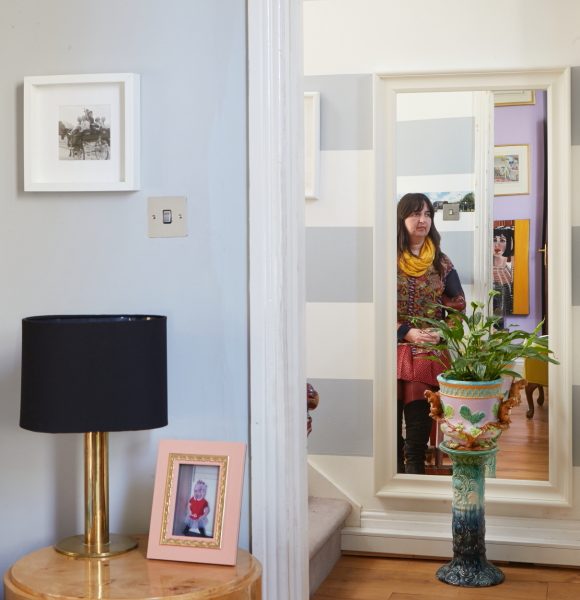 ‘It’s a joy to live in this house, the whole project has been very labour-intensive and is still constantly changing and evolving’, says Devine. ‘But I feel I can really express myself through the interiors and have found my true home.’

Erica is a graduate of Trinity College Dublin (Ancient History, Archaeology and Russian) and Durham University (Conservation of Historic Objects) and now works as an artist in plaster. She is a member of Glendarragh Artists’ Studios in county Wicklow, webiste link below!

Check out our homes features section for more posts like this!